Kiffin apologizes for ‘get the popcorn ready’ interview

Before the Alabama game, Kiffin responded to a question from CBS reporter Jamie Erdahl by saying: “Here we go. Get the popcorn ready.” Then he flipped away the headset and trotted off without letting her ask another question.

On Monday, Kiffin said the move was not premeditated and he got “caught up in emotions.” He said that he reached out to Erdahl to apologize.

“I don’t even know why it came out,” Kiffin said. “I actually told everyone, ‘I actually said something really stupid, you guys got to score a lot of points.’

”And it was the last question, they were calling for kickoff return and there were 30 second on the clock. I literally did not know there was another question and when I found out afterwards that that looked rude, I contacted Jamie and made sure she knew that was not on purpose. I do apologize for that, that was not done on purpose at all.”

Kiffin got a chuckle out of seeing video of Alabama mascot Big Al cavorting in the end zone sporting a giant popcorn box around his waist. 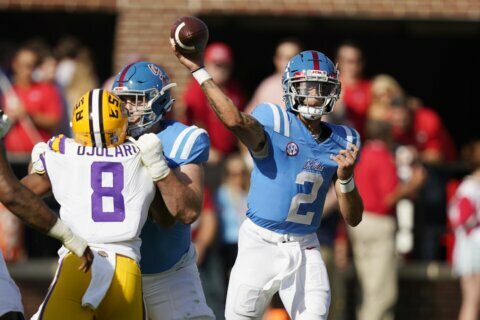 Oregon State may become bowl eligible for 1st time since ’13