“We are excited to go out and show the work we have put in during the last seven to eight months to go play some football,” Heupel said.

This will be Tennessee’s first opportunity to start recovering from a 3-7 record followed by the firing of head coach Jeremy Pruitt and nine other staffers over what the chancellor called “shocking” recruiting violations in January. Tennessee also hired a new athletic director in Danny White, who then hired Heupel.

More than 35 players have transferred since September 2020.

Heupel went from leading Oklahoma to the national championship in 2000 to becoming one of college football’s best offensive coaches. His Central Florida teams the past three seasons ranked among the nation’s best offenses, averaging 544 yards and 43 points in that span.

To run that fast-paced scheme, Heupel has handed the ball over to Michigan transfer Joe Milton as his starting quarterback. Milton won a three-way derby over Harrison Bailey, who started three games for the Volunteers last season, and Virginia Tech transfer Hendon Hooker with his strong arm and his legs.

“Joe’s ability to extend plays and broken plays turn into big plays is a part of who we have to be too,” Heupel said.

The Volunteers will kick off the 100th year of Neyland Stadium against Bowling Green, which is on a recovery path of its own. The Falcons lost all five games in last year’s abbreviated Mid-American Conference season. This will be the second game between these teams, and Tennessee routed Bowling Green 59-30 to open the 2015 season in Nashville.

SHOT IN THE ARM

Heupel said the Vols are making headway in terms of protecting themselves against COVID-19. He said the Vols’ vaccination rate is now “above 80%,” though a spokesman could not say what it was in early August when preseason camp began.

“I feel good about what we’re doing,” Heupel said. “What we’ve had to do here protocol-wise has changed here (on campus) during the course of training camp. Masks are required now in the meeting rooms. The kids have accepted it.”

This year’s edition of the Bowling Green Falcons has 19 true or redshirt freshmen listed on the team’s depth chart.

“I want to say 70% of our roster, this will be the first time they’ve ever played a college football game with people in the stands, which will be really exciting and outstanding,” Bowling Green coach Scot Loeffler said.

The Bowling Green staff has some familiarity with Milton.

“We’ve watched Joe quite a bit,” Loeffler said. “We studied Michigan quite a bit … and I know I’m excited to see Joe to go out there and play.

While losing more than 35 players, Tennessee added eight other Power 5 transfers besides Milton and Hooker.

Tennessee is one win away from joining some elite company in college football. The Volunteers, who are celebrating the 100th year of Neyland Stadium, currently have 849 victories and will become the 10th FBS program to reach 850 with the next victory. The others to reach that mark are Michigan, Ohio State, Alabama, Texas, Notre Dame, Oklahoma, Nebraska, Penn State and Southern California. 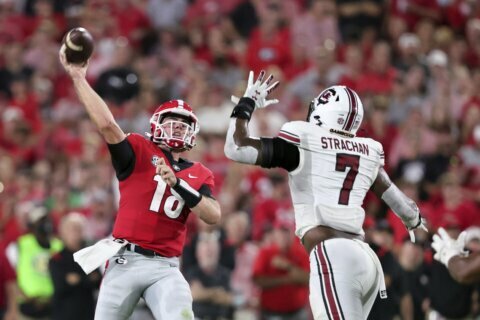