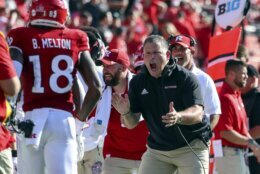 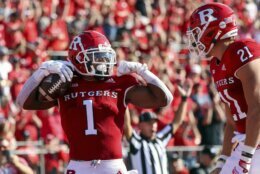 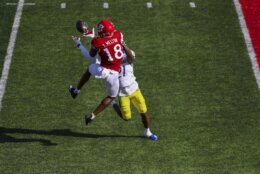 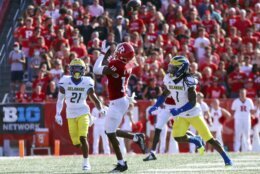 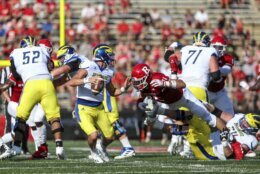 Noah Vedral threw for two touchdowns and Isaih Pacheco ran for two more as the Scarlet Knights defeated Delaware 45-13 Saturday for its first 3-0 start since 2012.

Vedral found Bo Melton on a 28-yard touchdown pass on his opening possession. He hit Brandon Sanders on a 62-yarder for the other TD in helping the Scarlet Knights take 35-10 half lead over their FCS opponent.

“It’s the little things; the little things,” said Vedral, who was 21 of 25 for 323 yards. “We were close here and we were close there, kind of keeping us from kind of reaching this explosive potential that we always felt we had. So really big day for us to kind of put the pieces together and to see it come together on the field.”

The statistics were impressive. Rutgers had a season-high 497 yards in total offense and didn’t turn the ball over for the third straight game.

“I think any time you perform efficiently like that, that would help anybody’s confidence,” coach Greg Schiano said of Vedral. “Noah doesn’t lack for confidence, though. He’s a very confident guy because he prepares so well.”

Pacheco tallied on runs of 20 and 7 yards, while Aaron Young plowed into the end zone from 6 yards out for the Big Ten Conference team. Aron Cruickshank excited the crowd of 40,129 with a 62-yard punt return for a touchdown.

Nolan Henderson threw a 1-yard TD pass to Thyrick Pitts for the Blue Hens of the Colonial Athletic Conference. Ryan Coe had field goals of 53 and 41 yards for Delaware (2-1).

Henderson, who limped off the field in the third quarter, finished 11 of 20 for 98 yards. He was sacked five times. Dejoun Lee ran for 121 yards, with his 71-yard sideline scamper setting up the TD. The Blue Hens ran for 159 yards, including the 42 yards lost on the sacks.

Delaware coach Danny Rocco said he expected his team to play better, but he was satisfied with their effort. He also had no regrets about scheduling an FBS opponent.

“These are games our student athletes want to compete in,” Rocco said. “Every now and then, you kind of dial it up just right. And you have an opportunity to take the game deep into the fourth quarter, and every now and then you find a way to win one. I was hopeful to do that today, and I’m disappointed that we were not able it.”

The three wins matched Rutgers’ (3-6) total in 2020 when Schiano returned for a second stint. He led the Scarlet Knights to six bowl appearances between 2001-11.

Rutgers had a Scarlet Knight waving a sword ride into SHI Stadium on a horse about 10 minutes before kickoff. It’s been done for years.

It appeared to be a different horse from last year and this time the animal got a little skittish entering the stadium. The rider eventually had to restrain it to prevent it from knocking over some band members who lined to welcome the horse and the team.

Rutgers took care of business in the non-conference part of its schedule and now finishes with nine conference games, starting with two ranked opponents. Delaware took its lumps playing an FBS team but pocketed $350,000.

Delaware: Has a been off and plays host Albany on Oct. 2.

Rutgers: Travels to No. 25 Michigan for Big Ten opener on Sept. 25. The Wolverines also improved to 3-0 with a 63-10 win over Northern Illinois.

“It means something we’re 3-0,” Melton said. “We work very hard to win every game. And I think for us, we just got a lot of good things going on.”