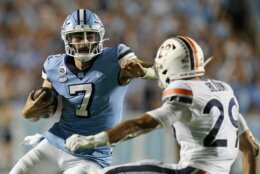 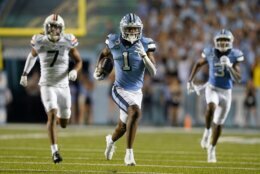 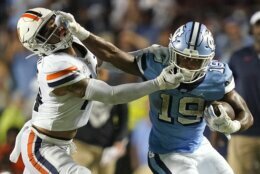 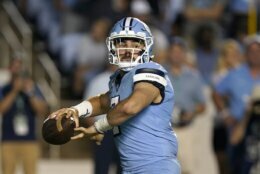 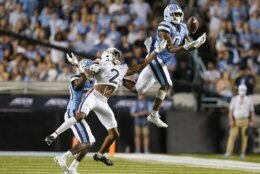 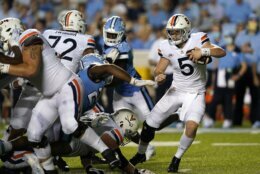 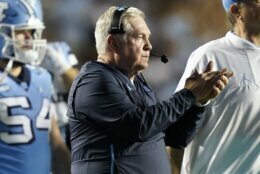 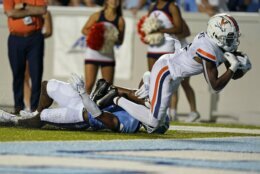 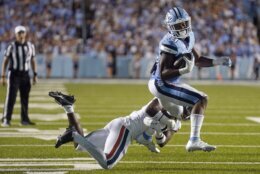 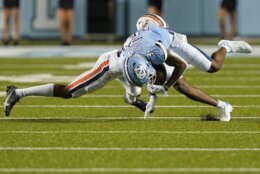 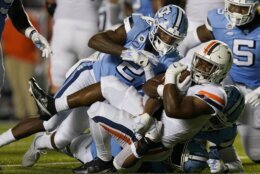 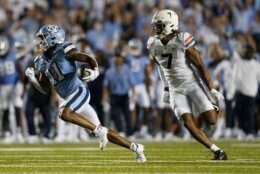 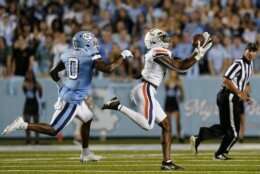 CHAPEL HILL, N.C. (AP) — Up and down the field they went, Sam Howell and North Carolina’s offense ending drive after drive in the end zone whether through the air on the ground.

The 21st-ranked Tar Heels have found some of the offensive rhythm missing in a season-opening loss.

Howell threw five touchdown passes and ran for a career-best 112 yards as North Carolina took over after halftime to beat Virginia 59-39 on Saturday night.

The Tar Heels (2-1, 1-1 Atlantic Coast Conference) scored touchdowns on all five of their second-half drives, which helped turn a 28-24 halftime deficit into a 52-31 lead on Howell’s short TD throw to Kamari Morales with 12:13 left. And after a first-half shootout with Brennan Armstrong and the Cavaliers (2-1, 0-1), North Carolina gave up only a field goal in the third quarter while also coming up with Ja’Qurious Conley’s interception.

Armstrong kept putting up numbers, too, with more yards than any Virginia quarterback had ever thrown in any game and more than any North Carolina opponent had ever surrendered. But there was no keeping up with the Tar Heels in this one.

“It was fun to watch them and both of them put on an absolute show,” North Carolina coach Mack Brown said, “and Sam just had more help with the running game.”

Indeed, there were no shortage of offensive stars.

Tennessee graduate transfer Ty Chandler ran for a career-high 198 yards with two touchdowns, the last from 7 yards out with 2:57 left to seal it. And Josh Downs had eight catches for 203 yards and a pair of TDs.

It was UNC’s biggest scoring output against Virginia since 1936 in the long-running series and second-most ever.

“We just played a complete game on offense,” Howell said.

Virginia’s offense did its job, with Armstrong throwing for a program-record 554 yards with four touchdowns. That included a career-best performance for Dontayvion Wicks (seven catches for 183 yards and a score) as the Cavaliers finished with 574 total yards. But coach Bronco Mendenhall could find no positives on defense, saying: “There really wasn’t anything stopped well.”

“There was basically two different games going on,” he said. “There was our offense against their defense and I was really impressed with our off performance. But then there was their offense against our defense, and they clearly won that matchup in every way.”

Virginia: The Cavaliers had won four straight meetings but they got little defensively other than Fentrell Cypress III picking off Howell in the end zone and returning it 66 yards to set up a second-quarter touchdown. They also did nothing to help Armstrong, running 22 times for just 21 yards.

North Carolina: The hype for the preseason league Coastal Division favorite had lost some luster after a season-opening loss at Virginia Tech, which included Howell being sacked six times and harassed into the first three-interception game of his career. The Tar Heels knew they couldn’t afford another stumble in the division race with that early loss, then responded by beating the Cavaliers for the first time since October 2016.

After a 14-spot fall from No. 10 after the Virginia Tech loss, the Tar Heels might be set up to start climbing again after a performance that looked much more like what everyone expected entering the season.

The Tar Heels faced the challenge of replacing star running backs Javonte Williams and Michael Carter, now in the NFL. This was the first time that, from beginning to end, the Tar Heels were churning out big runs without them.

UNC ran 47 times for 392 yards compared to just 21 pass attempts for their star quarterback, and finished with 699 total yards.

Armstrong completed 39 of 54 passes after throwing for a career-best 405 yards in last week’s win against Illinois.

Two years ago, Dyami Brown had six catches for 202 yards and three touchdowns. He followed with 11 catches for 240 yards with three more scores.

This time, Downs had a 57-yard catch-and-run TD on UNC’s first drive, then laid out for a spectacular 37-yard TD grab just inside the back right corner of the end zone on the second.

“Just from the game plan we had, I knew we were going to have some opportunities to kind of isolate Josh on the safety,” Howell said. “And every chance we had to do that, we connected on it.”

Virginia: The Cavaliers return home to play a cross-divisional league game Friday against Wake Forest, which beat Florida State on Saturday for a 3-0 start. 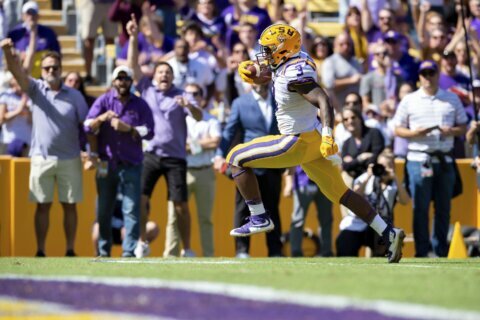 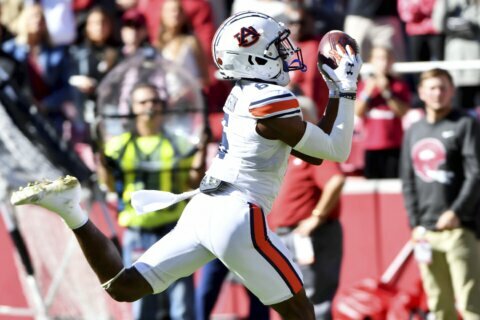