Holidays: Where to see holiday lights | Santa's back with inflation, inclusion on his mind | 4 ways to limit your holiday debt | Inflation 'definitely a guest' at holiday celebrations this year
Home » College Basketball » Miami pulls away in…

CORAL GABLES, Fla. (AP) — Jordan Miller scored 19 points and Miami pulled away in the second half to be UNC Greensboro 79-65 on Friday night.

Keondre Kennedy had nine points and Bas Leyte scored eight to guide UNC Greensboro (1-1) to a 34-33 lead at halftime. Miller had 12 points to keep Miami close.

Nijel Pack and Wooga Poplar hit back-to-back 3-pointers to open the second half and the Hurricanes never trailed again.

Isaiah Wong hit three 3-pointers and scored 15 for Miami. Pack had 14 points and four assists. They combined for 21 points in the second half. Norchard Omier finished with 11 rebounds and four assists, scoring six.

Mikeal Brown-Jones topped the Spartans with 13 points. Kennedy and Leyte both scored 12. Kennedy had seven of the team’s 27 rebounds. Dante Treacy scored 11.

Miami shot just four free throws in the game and made them all. UNC Greensboro sank 9 of 13 foul shots. 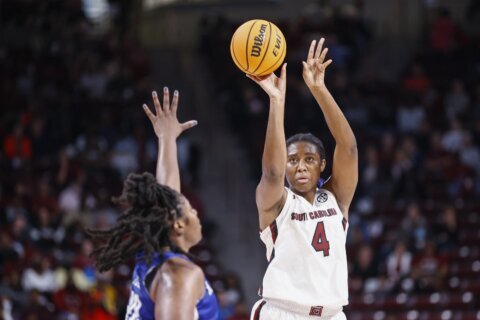