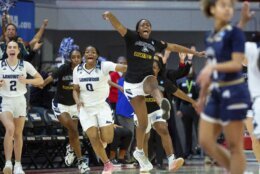 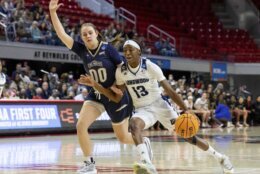 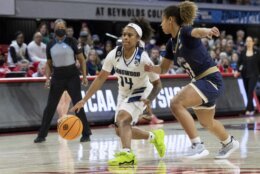 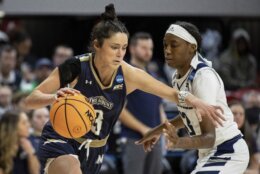 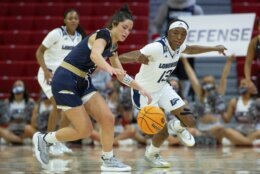 Longwood (22-11) will take a 10-game winning streak into a Saturday contest with ACC champion North Carolina State (29-3), the top seed of the Bridgeport Region. The Lancers are making their first NCAA Tournament appearance — three years removed from finishing with a 3-27 record.

Longwood scored the opening 13 points of the game, with eight from Smith, and led the rest of the way.

Mount St. Mary’s was 1 of 13 from 3-point range in the first half — nearly getting a second from Kendall Bresee on a half-court shot at the buzzer but it was waved off after a video review.

Longwood had its lead cut to 55-43 entering the fourth quarter. The Mount made six of their first eight 3-pointers of the second half and got within 57-50, but Smith scored the next six points for a 13-point lead with 5:07 left. Tra’Dayja Smith made 5 of 6 free throws in the final 30 seconds to help Longwood keep a two-possession lead.

Mount St. Mary’s (16-13), which only had seven available players due to injuries, lost for the first time in seven games.

Bresee, averaging a team-high 17.4 points a game, scored 15 of her 20 points in the third quarter for the Mount. She had just two points in the first half.

Mount St. Mary’s missed its first 10 shots of the game, eight coming from 3-point range, before ending its scoreless drought with 4:11 remaining on two free throws by Jada Lee. The Mount finished the first quarter shooting just 1 for 16, including 0 for 9 behind the arc.

Mount St. Mary’s was making its second straight appearances in the NCAA Tournament after entering the bubble in San Antonio as a No. 15 seed and falling in the first round to Maryland 98-45.