The plan was for Texas Tech to open Big 12 Conference play against Oklahoma State before diving into a three-game test against highly ranked league opponents, including the reigning national champions.

Instead, a postponement gave the 25th-ranked Red Raiders extra time to prepare, along with maybe some extra time to fret for new coach Mark Adams.

“You talking about my sleepless nights, my nightmares and all I’m going through?” Adams quipped Monday during a news conference.

Texas Tech (10-2) faces the first test Wednesday at No. 11 Iowa State, then returns home Saturday to host sixth-ranked Kansas. And next week? A visit to top-ranked Baylor.

They haven’t played since beating Alabama State on Dec. 28, with their New Year’s Day matchup with the Cowboys postponed to Jan. 13 due to COVID-19 protocols for the Oklahoma State program. Adams said the team spent the extra time working cutting down on turnovers while refining areas of strength, such as offensive rebounding.

Texas Tech entered the week ranked No. 9 in KenPom’s adjusted defensive efficiency (88.4 points allowed per 100 possessions), while it ranks fifth nationally in rebound margin (plus-12.4). The Red Raiders ranked 246th nationally in turnover percentage according to KenPom, losing the ball on 20.3% of their possessions.

“We certainly got to work on our offense in pushing the ball and trying to be more efficient and getting ready for Iowa State,” Adams said. “So (the postponement) gave us a few more days to prepare, which is always a plus.”

Speaking of the Big 12, Baylor — which remained the unanimous No. 1 in Monday’s new AP Top 25 poll — has won 19 straight games dating to last year’s six-game run in the Indianapolis bubble.

No. 7 Southern California and No. 20 Colorado State join Baylor as the only remaining unbeaten teams in Division I.

The Trojans (12-0) open Pac-12 play at California on Thursday, then visit Stanford on Saturday. The Rams (10-0) open Mountain West play Tuesday at home against Air Force before Friday’s trip to Boise State.

No. 21 LSU is already in the midst of its own demanding stretch in the Southeastern Conference.

The Tigers (12-1, 0-1) lost at No. 9 Auburn on Wednesday, but now get two home games against ranked league foes. They first host No. 16 Kentucky on Tuesday night, then host No. 18 Tennessee on Saturday.

Illinois and Oklahoma were the top two vote-getters among unranked teams.

Illinois (9-3, 2-0 Big Ten) started the year at No. 11, but fell out of the rankings before the end of November. The Illini visit Minnesota on Tuesday, then host Maryland on Thursday in a quick turnaround.

The Sooners (11-2, 1-0 Big 12) have a two-game set that could help them play their way into the poll for the first time under first-year coach Porter Moser. After visiting Baylor on Tuesday, Oklahoma hosts Iowa State on Saturday. 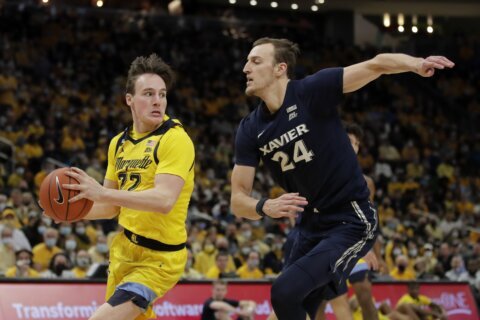 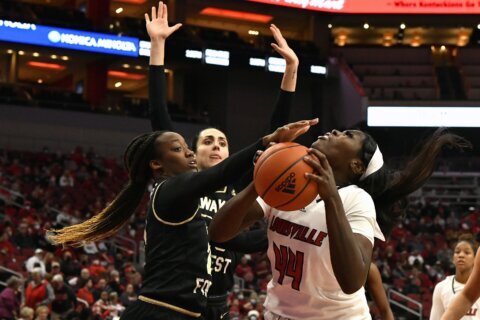 Van Lith leads No. 3 Louisville in win over Wake Forest