INDIANAPOLIS (AP) — Adam Kunkel realized pretty early in Friday night’s game against Butler it could be a good night for him.

Paul Scruggs contributed 16 points — including 9 of 9 free throws — seven rebounds and six assists for Xavier (12-2, 2-1 Big East), which returned from a long break due to COVID-19 issues with opponents.

“Kunkel had a great flow and rhythm.” Musketeers coach Travis Steele said. “He’s fearless. No moment is too big for him. He thrives off the crowd and loves to play on the road. It didn’t surprise us. We know how good he is.”

Butler trimmed the lead to 46-40 in the first 3 1/2 minutes of the first half, but Xavier followed with five unanswered points. The Bulldogs cut the deficit to seven twice but could get no closer.

“I felt like we gave up too many layups,” Steele said.

The Musketeers had 17 days off, and Steele said he “felt like we hadn’t played in two years and the kids were dying to play. We had good practices leading up. That happens when you have good leaders.”

Steele was especially pleased his team had just six turnovers, the same total as Butler.

“Obviously, defensively when they shoot 60% and they got in a rhythm,” Butler coach LaVall Jordan said. “Kunkel made some huge shots in the second half. I told our guys I’m proud of the effort. We have to be smarter as far as defensive help. We just have to get better and keep growing.”

Golden said the team needs to play smarter, adding: “There is nothing we can’t clean up.”

Xavier: The Musketeers didn’t show much rust after having games against Connecticut and Georgetown postponed. … Xavier took the lead at 12-9 on a Colby Jones’ 3-pointer and held it the rest of the way.

Butler: The Bulldogs, who entered the game 11th in the Big East in scoring, could use some offensive help. … Bo Hodges, who averaged 8.2 points last season but hasn’t played this season because of knee injury, was supposed to be ready to go soon. However, Jordan said before the game that Hodges suffered a small setback in practice and wasn’t available Friday. … Ty Groce missed his second consecutive game because of COVID-19 protocols.

With this being Xavier’s only game of the week, the Musketeers will likely maintain their ranking.

Xavier: Hosts No. 19 Villanova on Wednesday.

Butler: At Georgetown on Thursday to start a stretch of three road games. 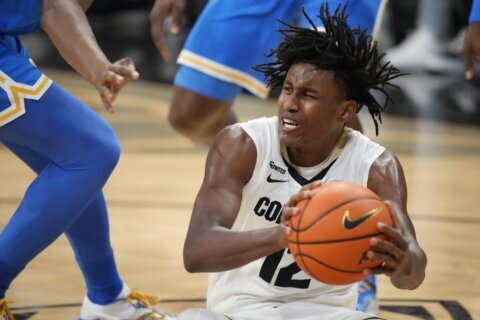