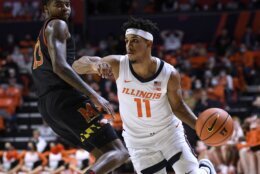 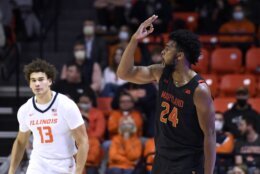 Cockburn scored 23 points and tied a career-high with 18 rebounds after early foul trouble. He made 9-of-12 shots with many coming thunderous dunks from the powerful 7-footer listed at 285 pounds.

The Illini sprinted to a 21-7 lead with Cockburn scoring a third of those points. His last basket of the first half put Illinois up 14 with 10:50 left before the break, but 16 seconds later he picked up his second foul and went to the bench.

Maryland took advantage and erupted with a 23-7 burst and took its first lead 30-28 on Donta Scott’s 3 with 2:30 before halftime. The Terrapins led 34-30 at halftime, Scott missed just one of seven shots and had 15 at intermission.

Scott finished with 17 points and Ayala had 16.

Illinois (11-3, 4-0 Big Ten Conference) beat Maryland at home for the first time since 2015. The Illini last won its first four conference contests in the 2009-10 season.

Maryland (8-6, 0-3) has lost its opening three conference games for the first time since joining the Big 10. The last time the Terrapins lost their first three in conference was the 1999-00 season when they were in the ACC.

Next up for the Terps is a home game Sunday against No. 23-ranked Wisconsin. Illinois travels to Nebraska on Jan. 11