UNCASVILLE, Conn. (AP) — Leigha Brown scored 25 points to lead No. 13 Michigan to a 74-68 win over fifth-ranked Baylor on Sunday in the Hall of Fame Women’s Showcase.

It was the Wolverines’ first win ever over a top-five team.

The game was a rematch of last season’s NCAA Tournament overtime thriller that Baylor won 78-75. NaLyssa Smith made all 11 of her shots from the field in that game. While the stakes weren’t the same, this game was just as competitive.

Leading 66-65 in OT, Emily Kiser made two free throws and Brown added a jumper that gave the Wolverines (11-1) a five-point lead with 1:23 left.

Baylor (9-2) got within 70-68 and after a turnover had a chance to tie it, but Smith missed a drive down the lane with 15 seconds left. Maddie Nolan converted two free throws with 11.7 seconds left to seal the win.

Smith had 21 points and 14 rebounds for Baylor.

UNCASVILLE, Conn. (AP) — Hailey Van Lith scored 10 of her 16 points in the fourth quarter and Louisville outlasted UConn in the Women’s Hall of Fame Showcase.

Kianna Smith also scored 16 points Cardinals (10-1), who trailed for much of the game, but outscored the shorthanded Huskies (6-3) 27-19 over the final 10 minutes. Ahlana Smith added 11 points.

Freshman Caroline Ducharme had a season-high 24 points and eight rebounds to lead UConn, which was playing its third straight game without injured star Paige Bueckers.

N.C. State used a 19-9 run early in the second half to pull away. Cunane had eight points over that stretch. She also had two steals in the game and made all five free throws.

Holmes grabbed her 10th rebound just under two minutes into the second half and finished the game with 17 points and 19 rebounds for Indiana (9-2). She set a career high in rebounds one game after scoring a career-best 30 points against Ohio State.

Reilly Jacobson was Western Michigan’s leading scorer with 16 points. Taylor Williams added a double-double of her own with 15 points and 13 rebounds.

LAS VEGAS (AP) — Aliyah Matharu scored 22 points and DeYona Gaston notched her first double-double of the season to lead Texas over San Diego in a matchup that was put together late Saturday night.

Texas (8-1) was supposed to play No. 4 Arizona (10-0) as part of the Coast-to-Coast Challenge, but the Wildcats were forced to pull out due to COVID-19 protocols and contact tracing within the Wildcats’ program. San Diego volunteered to step in and play the Longhorns.

Matharu sank 7 of 13 shots for Texas with two 3-pointers. Gaston finished with 11 points and 10 rebounds. Audrey Warren pitched in with 10 points and seven boards, while Joanne Allen-Taylor scored 10.

Iowa State scored 65 points in the first half and held Prairie View to 11. The Cyclones made 14 3-pointers before halftime and matched the record when Maddie Frederick hit No. 19 with 1:57 remaining in the game.

Six players contributed to the 3-point storm, led by six each from Donarski and Aubrey Joens.

Georgia Tech took the early lead and never looked back. The Yellow Jackets led 29-17 at halftime, as Wake Forest made only five field goals in the first half.

LEXINGTON, Ky. (AP) — Rhyne Howard scored 13 of her 18 points during a ferocious 17-0 third-quarter run as Kentucky asserted itself against South Carolina Upstate in an Ugly Sweater game.

Howard missed five shots in the first quarter as Kentucky (7-3) got off to a rocky start, shooting 13% and falling into a 14-5 hole.

Denijsha Wilson and Terah Harness each scored 11 for the Spartans (8-3).

Jaelyn Batts opened the fourth quarter with a jumper to cap a 10-0 run for the Eagles that made it 62-47. A 9-0 run pulled North Carolina within 66-64 with 4:05 to play but Cameron Swartz scored five quick points for the Eagles.

Maria Gakdeng made a layup with 2:23 to go for a 73-66 Boston College lead, then Littlefield scored five straight points before Kelly’s step-back 13-foot jumper with 10.2 seconds put North Carolina on top. Kelly then stole the ball and made two free throws with 9.1 seconds to play. 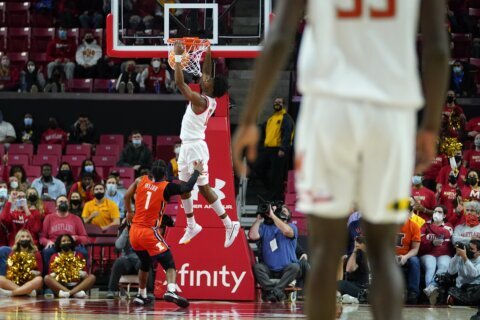