LOUISVILLE, Ky. (AP) — Noah Locke scored 14 of his 17 points in the second half and Louisville rallied to beat Wake Forest 73-69 in the Cardinals’ Atlantic Coast Conference home opener on Wednesday night.

It was raining 3-pointers in the final five minutes of the game. Isaiah Mucius hit a 3 to give Wake Forest a 61-60 lead with 4:47 remaining. Louisville (8-4, 2-0) regained the lead on a Locke 3-pointer before Mucius hit again from deep to put the Demon Deacons (11-2, 1-1) up 64-63 with 2:21 left. Louisville took a two-point lead on a 3 by Malik Williams before Daivien Williamson hit from deep to put Wake Forest ahead 67-66 with 1:30 left. Locke put the Cardinals on top for good with 1:08 remaining with his fifth 3-pointer, adding two free throws with 16 seconds left to make it a two-possession lead.

Jake LaRavia and Alondes Williams each scored 15 to pace the Demon Deacons, who saw a five-game win streak end. LaRavia sank just 4 of 11 shots but hit 7 of 9 free throws. Williams, who is averaging 21 points per game, made only 4 of 14 shots — 1 of 6 from deep — but hit 6 of 7 foul shots. LaRavia added seven rebounds, while Williams finished with seven assists. Daivien Williamson scored 14.

Wake Forest was playing for the first time since Dec. 17 after its game with Boston College was postponed after the Eagles entered COVID-19 health and safety protocols.

Louisville was playing for the first time since Dec. 18 after entering COVID-19 protocols. The Cardinals’ Dec. 22 game with Kentucky was postponed. Louisville is now 9-1 in its last 10 conference home openers. Louisville out-rebounded Wake Forest 40-36 and is 7-0 this season when winning the battle of the boards. 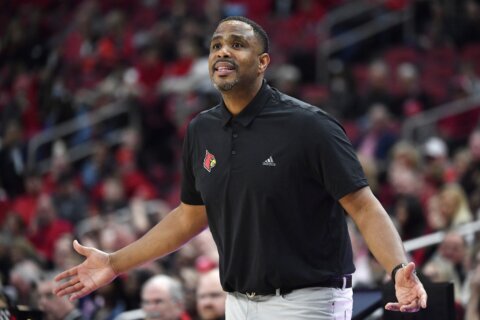