Indiana gallops away from Merrimack in 2nd half, 81-49

Jackson-Davis added nine rebounds and blocked three shots, punctuating a 13-0 breakaway run by Indiana (8-2) with a fastbreak layup off a block and then an alley-oop dunk on a feed from Rob Phinisee.

Merrimack (4-8), which was coming off a loss at No. 5 Gonzaga, had stayed close to the Hoosiers early, trailing 36-30 at halftime when Jordan Minor had a tipin at the buzzer. But the Warriors, transitioning to the Division I level, were forced away from the basket in the second half, making five of their first 17 shots, all from beyond the 3-point arc.

Indiana dominated inside, owning the glass 54-16. Jordan Geronimo had 13 points with 13 rebounds for his first career double-double.

Minor scored 13 to lead Merrimack with Ziggy Reid and Malik Edmead each adding 11. The Warriors were 6-for-25 shooting in the second half, scoring just 19 points. Merrimack had 10 steals — Edmead, Minor, Reid and Mykel Derring with two each — but scored just seven points off 17 Indiana turnovers.

The Hoosiers picked up 17 points off 10 Merrimack turnovers.

Merrimack is next at Maine Dec. 21 before beginning its second season of Northeast Conference play Dec. 29. The Hoosiers next take on Notre Dame as part of the Crossroads Classic Dec. 18 in Indianapolis. 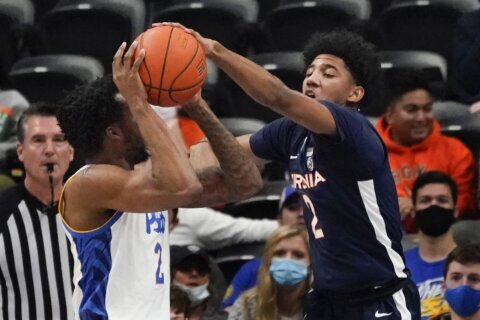