After an impressive win, Indiana has vaulted to its best ranking ever: No. 4 in The Associated Press Top 25…
Listen now to WTOP News WTOP.com | Alexa | Google Home | WTOP App | 103.5 FM

After an impressive win, Indiana has vaulted to its best ranking ever: No. 4 in The Associated Press Top 25 women’s basketball poll.

The veteran Hoosiers had their best ranking ever at No. 8 in the preseason Top 25 and then had a week that included a rout of then-No. 13 Kentucky, 88-67. Indiana returned all five starters from last season’s team that went to the Elite Eight and had its sixth consecutive 20-win season.

“I’d like to think the the band’s back together,” coach Teri Moren said. “This team has a tremendous chemistry and plays well together. There’s something to be said for experience as they have a really good feel for one another.”

South Carolina remained the top team in the poll, receiving 25 first-place votes from a national media panel. The Gamecocks had an impressive nine-point win at No. 5 North Carolina State to tip off the season.

The Gamecocks were followed by UConn, which garnered the other five No. 1 votes, and Maryland.

All five of the top teams will head to the Bahamas over the next two weeks to play in two tournaments. There is the potential for a 1-2 matchup between the Gamecocks and Huskies if both teams win their first two games in the Battle 4 Atlantis tournament.

The Hoosiers, Terrapins, Wolfpack and No. 7 Stanford play in another round-robin tournament on the island over Thanksgiving. The Cardinal dropped four spots after losing to then-No.25 Texas, which jumped to No. 12.

“It’s a great field. I think it’s going to be an interesting year for women’s basketball,” Moren said.

The Longhorns climbed 13 spots, ending up just behind Arizona, which jumped to No. 11 from 22nd after an overtime victory against then-No. 6 Louisville. The Cardinals fell to 10th.

No. 22 West Virginia is the lone member of the Top 25 yet to get its season started. The team will host Saint Francis (Pa.) to open the season on Tuesday.

Kentucky fell to 19th after its loss to Indiana. … Rutgers coach C. Vivian Stringer is stepping away this season because of COVID-19 concerns. Stringer has 1,055 wins in her 50-year coaching career and is fourth all-time in Division I victories. The school decided that any win or loss this season will go to acting head coach Tim Eatman. Teams coached by Stringer have been ranked 439 weeks, the fifth most ever.

Baylor at Maryland on Sunday. Before the No. 3 Terrapins head to the Bahamas next week, they will host the No. 6 Bears. That will be the first of three top-10 teams that Brenda Frese’s team will face. Maryland plays No. 5 N.C. State on Thanksgiving and No. 7 Stanford two days later. 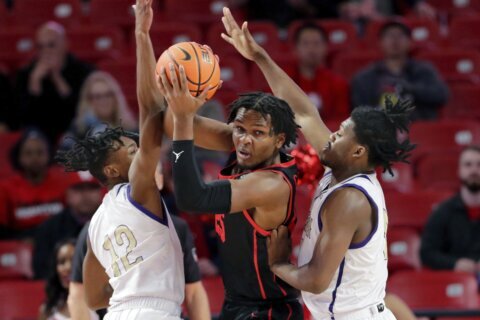