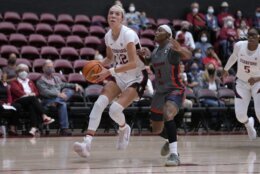 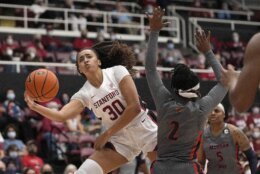 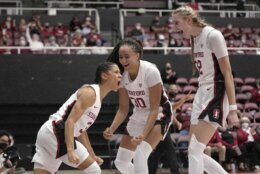 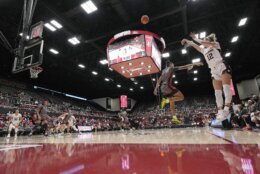 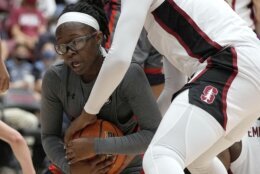 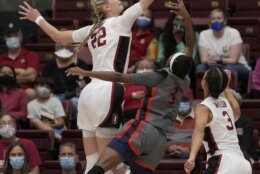 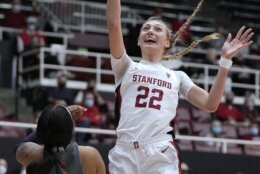 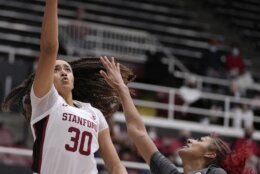 STANFORD, Calif. (AP) — Defending NCAA champion Stanford has depth, versatility and still plenty of things Hall of Fame coach Tara VanDerveer wants her team to do better as the games get tougher.

No resting on the success of last season.

“What our returners have to understand is not to be complacent,” VanDerveer said. “I don’t think anyone is consciously.”

Cameron Brink had 10 points, five rebounds and three blocks for the third-ranked Cardinal. VanDerveer mixed and matched rotations and that produced a balanced attack from her deep and versatile roster. Stanford scored 47 bench points and 14 out of 15 players scored.

“This is a great first game for us. This team gave us a little bloody nose then we responded,” VanDerveer said. “… We’re counting on our upperclassmen who have been to the Final Four to really lead the way.”

This marked the highly anticipated debut of Stanford fifth-year senior transfer Jordan Hamilton, who joined the Cardinal from Northwestern. She came off the bench at the 3-minute mark of the second and made a 3-pointer to help her team build a 39-19 halftime lead. Hamilton had four blocks in a 105-35 exhibition victory over Clarke on Saturday.

Stanford is picked to win the Pac-12 Conference regular-season crown after capturing the program’s first national title since 1992 and the third in program history by beating Pac-12 rival Arizona in the title game, 54-53. That’s after the Cardinal held off South Carolina also by a single point — 66-65 — in the national semifinals.

“I think we learned a lot from it and it’s really exciting to see everyone get in there and really contribute,” Hull said. “Everyone did something good and also everyone has something they can take away from and work on tomorrow.”

Adia Brisker scored 22 points for the Bears (0-2) from Baltimore. Morgan State lost its opener 69-53 at San Francisco on Tuesday night.

Morgan State had another tough day shooting to fall behind early in the game, going 1 for 13 in the opening quarter to trail 21-3 after the first.

After Brisker’s 3-pointer got the Bears on the board at the 6:31 mark, then were 0 for 8 with five turnovers over the rest of the quarter as Stanford went on an 14-0 burst.

The Bears made five free throws before their next field goal, on Brisker’s layup with 3:56 left in the second — ending a stretch of 14 straight missed shots. Brisker went down hard under the basket with 1:08 before halftime but was OK to stay in and shoot her free throws after a foul by Lexie Hull.

Morgan State: Junior F Joel Benoit was helped off with 2:02 left in the game nursing a left leg injury. … The Bears play four straight road games before opening at home Nov. 19 against Notre Dame of Maryland University. … Morgan State fell behind in the first quarter for a second straight game — 18-8 in the opener against USF.

Stanford: The Cardinal scored 19 points off Morgan State’s nine first-half turnovers, including sixth-year Stanford senior Anna Wilson’s steal she drove most of the court before converting a three-point play 3:01 before halftime, and 41 points off 27 overall turnovers. … Stanford recognized veterans on Veteran’s Day during a first-quarter timeout.

Morgan State: At Missouri on Sunday.