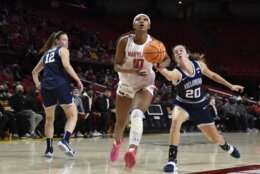 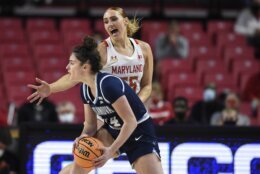 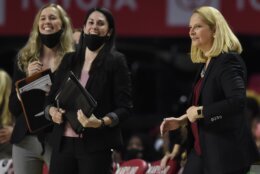 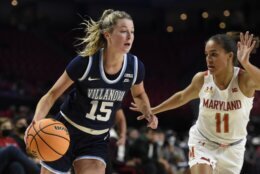 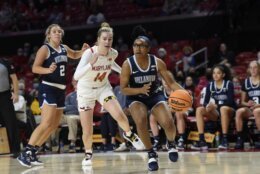 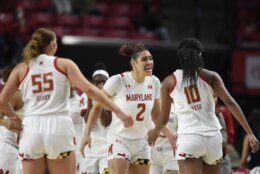 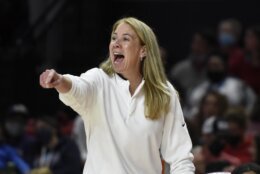 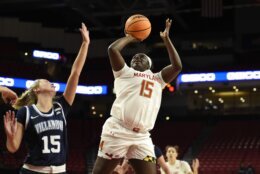 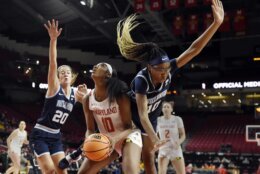 COLLEGE PARK, Md. (AP) — For the second straight game, Angel Reese set a new career-high in points to lead No. 4 Maryland to an easy win. This time, she was joined by five teammates in double figures as the Terrapins beat Villanova 88-67 on Friday night.

Reese had 23 points in just under 23 minutes, and went 10 for 15 from the field and hit all three free throws. Mimi Collins added 17 and eight rebounds. Ashley Owusu had 13, Shyanna Sellers and Katie Benzan scored 12 and Chloe Bibby had 11.

It was another decisive win for the Terrapins (2-0), who beat Longwood by 30 in their opener on Tuesday.

“They had no answer for Angel inside,” Maryland coach Brenda Frese said.

The Wildcats (0-2), who lost by 17 to Princeton in their first game Wednesday, were led by Brianna Herlihy with 16 and Lior Garzon with 15.

Maryland broke the game open by outscoring Villanova 26-13 in the second quarter, shooting 66.7% (10 for 15) and holding the Wildcats scoreless for about four minutes.

In the third quarter, the Terrapins scored 20 straight points as they held Villanova scoreless for almost six minutes and built a 69-37 lead.

“Maryland is a dynamic, excellent team,” Wildcats coach Denise Dillon said. “I thought this was a great early game for us to see and prepare for what we will have conference-wise with a team like Connecticut.”

Villanova: After a disappointing loss to Princeton, the Wildcats played well in the first quarter, but had long droughts in the second and third quarter. They’ll need to be more consistent to be a factor in the Big East.

Maryland: Showed its prowess in their second- and third-quarter runs. With a tough nonconference schedule starting later this month — including three teams ranked in the Top 10 — they’ll need to play at this level to remain undefeated.

The players in double figures accounted for all of Maryland’s 88 points, prompting Frese to say, “That’s when you’re hard to scout, hard to prepare for.”

Without Miller on the court, Reese knows there’s more pressure on her.

“On the defensive end, for sure,” Reese said. “I want to be out there and be the best defender.”

Collins had eight of Maryland’s points in the 20-0 run.

“I think it was just me picking up my defense because Coach B wanted me to play better defense. In turn, when I turned on my defense, it just turned on my offense,” Collins said.

INJURY UPDATE: Frese couldn’t provide a timetable for when Miller might return. “It’s hard because we’re just waiting for her to rest and be more pain-free,” she said. “I think that’s the big thing. She’s doing a lot of rehab. It’s still day-to-day.”

Maryland: At James Madison on Sunday.