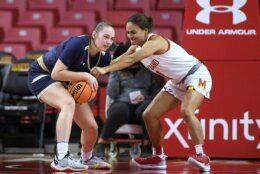 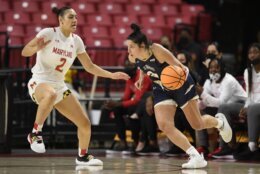 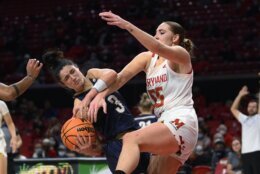 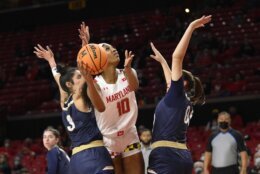 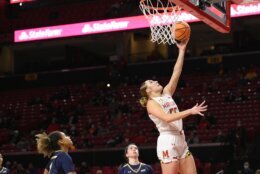 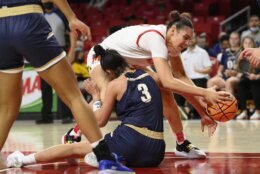 COLLEGE PARK, Md. (AP) — In their first four games, the No. 3 Maryland Terrapins have won by an average of 31 points. After their latest win, a 98-57 romp over Mount St. Mary’s coach Brenda Frese said that the team’s biggest victory of the season wasn’t good enough for her.

“I still wasn’t pleased tonight,” Frese said. “If there’s a team that’s a lesser opponent than us, we’re looking for perfection in everything that we’re doing.”

Maryland (4-0) scored the game’s first 16 points and didn’t allow a field goal until Taylor hit a 3-pointer with 2:13 left in the first quarter.

Mount St. Mary’s (1-2), which rolled over Division III Valley Forge 102-15 on Saturday, had no answer for bigger, more athletic Maryland. The Terrapins outrebounded the Mount 51-31.

“Some of their looks were a little bit too easy.”

Owusu, who rolled her left ankle early in the third quarter in Sunday’s game at James Madison, practiced on Monday, and showed no ill effects during her time in the game.

Mount St. Mary’s: After their lopsided win against overmatched Valley Forge, and this difficult loss against a highly ranked team, the Mount has two games, against Lehigh and Howard that they should be competitive in.

Maryland: The Terrapins continue to methodically defeat their opponents, and beginning Sunday face a tough week of games against No. 6 Baylor, No. 5 NC State and No. 7 Stanford.

Frese had no complaints about how quickly Maryland began the game.

“I loved our start,” Frese said. “I loved that first quarter. When you’re talking about seven points, I thought it was a pretty complete game for us.”

Walker, in his first season as Mount St. Mary’s coach had a different perspective about Maryland’s big start.

STAT OF THE GAME

Maryland had 20 assists to nine turnovers while Mount St. Mary’s had 13 assists and committed 19 turnovers.

With so many difficult teams in the near future, Reese tried to make certain the team didn’t let up.

“I was letting the game come to me per usual,” she said. “My teammates were feeding me, and they were much smaller than us, and taking advantage of the inside-out was a big thing.”