Kam Jones scored all 12 of his points off four 3-pointers down the stretch and Darryl Morsell finished with 11 points for the Golden Eagles (5-0), who trailed by 12 early in the second half. Marquette bounced back from 12-point deficits against Ole Miss and Illinois in its two previous games.

Marquette turned six consecutive West Virginia misses into a 13-0 run and a 55-54 lead with Kolek hitting two 3-pointers. There were four lead changes and a tie after that but Marquette clung to a lead in the final 10 minutes behind Jones’ four 3-pointers. Six free throws in the final minute sealed it.

The Mountaineers overcame an early six-point deficit with a 17-2 run for a 25-16 lead. A 9-0 run capped by a 3-pointer by McNeil gave West Virginia is largest lead of the half at 14 before Kolek hit a jumper in the final minute to leave the Golden Eagles down 47-35.

The Mountaineers shot 58% in the first half and had five 3-pointers, one more than the Eagles, who took six more shots from distance. But in the second half, West Virginia fell off to 27% and made just 2 of 12 from the arc while Marquette shot 64% and made 8 of 13 3-point tries.

Marquette plays No. 22 St. Bonaventure in the championship game Sunday while West Virginia takes on Clemson. 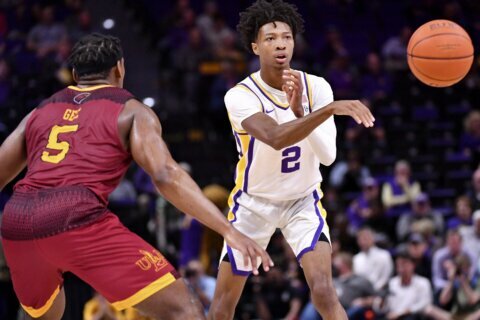