LAWRENCE, Kan. (AP) — Bill Self knew that Ochai Agbaji was within one point of 1,000 for his career, so the Kansas coach reminded his star player of the milestone in the gentlest way possible during a late timeout against Stony Brook.

“Coach told me that if I didn’t shoot he was going to take me out,” Agbaji said with a smile.

Well, he shot. And he didn’t score.

So despite 25 points from Agbaji in an 88-59 victory over the Seawolves on Thursday night, he remains sitting precariously on 999 as the third-ranked Jayhawks prepare to head to the ESPN Events Invitational in Florida next week.

“Really my main focus has been consistency,” said Agbaji, who opened with 29 points against Michigan State and had 26 against Tarleton. “Not going out with a total in mind or anything like that. Just being assertive and consistent every night.”

David McCormack added 12 points and eight rebounds, and Christian Braun and Zach Clemence scored 11 apiece for the Jayhawks (3-0), who only led by six at halftime before heating up from beyond the arc. They were 2 of 10 in the first half but hit seven of their first nine 3s in the second, finishing 50% from the field for the game.

“I thought we guarded better the second half,” Self said, “but their guards walked into way too many shots. I thought guarding their actions we did fine; guarding their players we didn’t do a very good job.”

Tykei Greene had 11 points and nine rebounds to lead the transfer-heavy Seawolves (0-2), who hadn’t played in nine days since their season-opening loss to George Mason.

For long stretches of the first 20 minutes, Stony Brook seemed to be making every shot it took, particularly those that the small school from Long Island hoisted from beyond the 3-point arc.

They led by seven early and continued to keep the Jayhawks at bay through most of the first half.

It wasn’t until McCormack checked back in with about 6 minutes to go that Kansas finally went on a run. His bucket was followed by one from Agbaji, then the 6-foot-10 forward followed a miss by Agbaji with another hoop before Dajuan Harris Jr. picked the pocket of Jahlil Jenkins and cruised in for a layup that forced Stony Brook to call timeout.

Agbaji had 10 points in the first half, then 10 in the first 3 1/2 minutes of the second: two 3s, an easy bucket and a dunk in four trips down floor. On the fifth, Agbaji merely assisted on McCormack’s basket as the lead stretched to 52-40.

It eventually surpassed the 20-point mark when Agbaji converted a circus-style three-point play with about 10 minutes to go, allowing the Jayhawks to coast the rest of the way to their 21st straight nonconference win at home.

“I don’t know that I envisioned (Agbaji) leading the country in scoring, which I think he is,” Self said, “but he’s prepared to have a good start to the year. He’s playing with confidence. I think that first game did probably wonders for his confidence and he’s playing well. He’s not forcing anything and playing within himself, and he’s very efficient.”

Jayhawks guard Remy Martin tweaked his back a few days ago, Self said, but tried to play through it. Martin missed his only two shots with four rebounds and two assists in 18 scoreless minutes. “He’ll be fine,” Self said.

Stony Brook is going to give fits to the rest of the America East, which it was predicted to win for the first time since the 2015-16 season. The Seawolves have enough size to deal with bigger teams, plenty of scoring punch on the perimeter and, perhaps most importantly, weren’t awed by their first trip to Allen Fieldhouse.

Kansas showcased remarkable depth against the Seawolves, and that should only increase when Jalen Wilson returns next week. He’s been suspended the first three games after he was arrested on suspicion of drunken driving. Wilson declared for the NBA draft after last season before returning for his sophomore season. 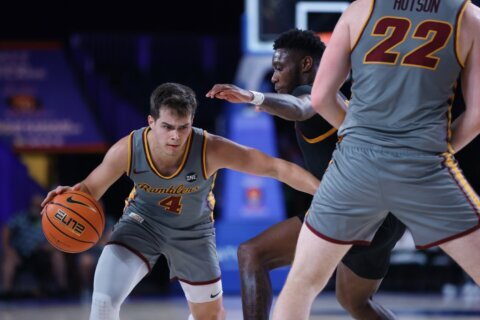 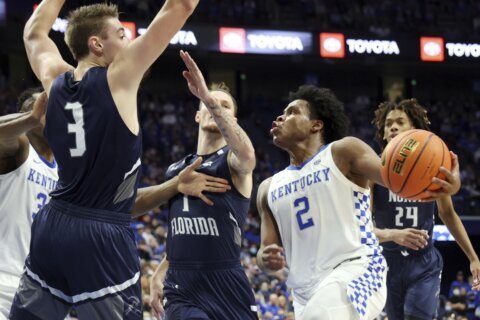 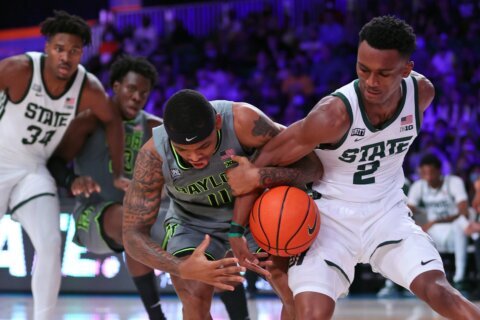