CORAL GABLES, Fla. (AP) — Miami’s new point guard is playing for his fourth different team. He’s the shortest guy on the roster, yet is known for his toughness, and was immediately asked to be a leader on his new squad.

The Hurricanes’ hopes this season might hinge in large part on Moore, a 5-foot-11 guard who has already started games for California, Kansas and DePaul in his college career and now has signed with Miami — his fourth school, in his fourth different major conference. No player on the Miami roster has scored more college points than Moore, one of six Hurricanes newcomers this season.

“We’ve both been to a lot of places,” Miami guard Kameron McGusty said. “He’s been in and played in two different conferences. He’s played in three conferences, actually; this will be his third.”

Not quite. This will be his fourth.

Moore has already been in the Pac-12, the Big 12 and the Big East. Now, he’s taking a shot at the Atlantic Coast Conference, where he and McGusty — who transferred from Oklahoma in 2018 — will be among four sixth-year seniors on the Hurricanes’ roster.

“We just try to use our knowledge that we’ve gained throughout our six years and use all the things that we’ve seen from different teams and different conferences and just help our team prepare and try to help our young guys get on track so they’re ready to help us contribute this year,” McGusty said.

Miami went 10-17 overall and 4-15 in the ACC last season, the Hurricanes’ third consecutive year finishing below .500 in both categories. That followed a three-year run of NCAA Tournament appearances for the Hurricanes, one that tied the longest such stretch in school history.

But with three starters back, plus talented new arrivals like Moore, Miami expects improvement. Leading scorer Isaiah Wong (17.1 ppg last season) returns, along with McGusty (13.3) and Anthony Walker (9.6). Moore and fellow transfer Jordan Miller (13.0 ppg in 69 games at George Mason) are among the new faces that will be asked to help from the first tip-off of the season.

Between redshirt years and the 2020-21 season not counting toward anyone’s eligibility under NCAA rule because of how much the pandemic affected matters, the Hurricanes’ 10 players with previous college experience have combined to play 45 seasons. Miami also has four freshmen on the roster.

Wong was the fifth-leading scorer among ACC players last season, plus ranked fourth in free throw percentage and 12th in field goal percentage.

“Playing more minutes and getting more playing time, it just got easier and easier, adjusting more to the game,” Wong said. He averaged 7.7 points in about 21 minutes per game as a freshman, then averaged about 35.5 minutes as a sophomore.

There won’t be a farewell game for retiring Duke coach Mike Krzyzewski at Miami this season; the Hurricanes play the Blue Devils only once, and it’s at Cameron Indoor Stadium. Larrañaga reflected on what the ACC will be like this season without now-retired North Carolina coach Roy Williams and the pending departure of Krzyzewski.

“You’re talking about two of the great leaders of college basketball, role models who really set the example of how to run a program, how to develop your players and prepare them for life after basketball,” said Larrañaga, entering his 38th season as a head coach, 36th at the Division I level and 11th at Miami.

FanDuel Sportsbook has the Hurricanes as one of the longest shots on their board to win the national title, with opening odds of 200-1. Of the 30 teams with the best odds according to FanDuel, seven — Duke, Florida State, North Carolina, Syracuse, Virginia Tech, Louisville and Virginia — hail from the ACC.

Miami starts with five of eight games away from home, then closes with eight of its last 12 — all ACC games — on the road as well. At least the early travel won’t be too daunting, with 13 of Miami’s first 15 games to be played in Florida. The Hurricanes’ Dec. 1 game at Penn State in the ACC-Big Ten challenge will have an emotional tie; Adam Fisher, entering his first season as Penn State’s associate head coach, went back to his alma mater after coaching the last eight seasons at Miami. 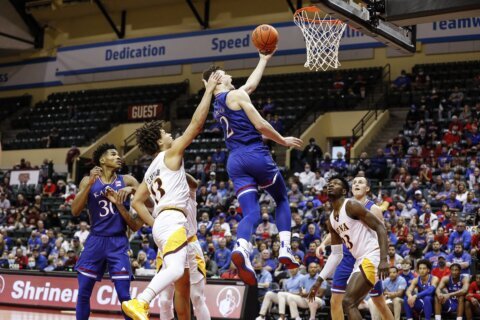 Smith & Smith each score 11 as No. 10 Louisville beats CSU