GREENSBORO, N.C. (AP) — Elissa Cunane didn’t play in either of third-ranked North Carolina State’s matchups with Virginia Tech, including one the Wolfpack lost. Her presence certainly changed things in the third meeting.

Jada Boyd added 13 points off the bench for the second-seeded Wolfpack (18-2), who took control in the second quarter and stayed in front for the rest of the quarterfinal matchup.

The Hokies beat the Wolfpack in overtime on Jan. 28, which came four days after they led by 14 in the fourth quarter before N.C. State rallied to win. The 6-foot-5 Cunane, an Associated Press third-team All-American last year, missed both meetings due to COVID-19 protocols.

Cunane made 10 of 15 shots and 7 of 8 free throws in this one for a big performance against 6-5 Hokies sophomore Elizabeth Kitley, a familiar opponent from their days competing for Greensboro-area teams before college.

“Yeah, there was definitely a lot to play for today,” Cunane said. “I had some time to make up after not playing Virginia Tech the first two times this season. And we’re on a bigger stage now. It’s tournament time. … We’re coming out here because we’ve got business to do.”

Meanwhile, Boyd — who shared honors as the ACC’s top reserve this year — came through with a big game that included 10 rebounds and three blocks.

Boyd’s play was particularly valuable considering starters Jakia Brown-Turner and Kayla Jones had quiet offensive games. Boyd had nine points in the second quarter that tipped control to N.C. State, which shot 48% after halftime to stay in front as Virginia Tech tried multiple pushes to get back in it.

Kitley had 20 points and nine rebounds for the Hokies (14-9), the tournament’s seventh seed. The teams were tied at 16 after the first quarter, but the Hokies went 1 for 15 in the second period — including the last 5:45 of the half without a basket.

That created a big hole they couldn’t escape, even after getting as close as four late in the third.

“The 1-for-15 shooting, I don’t think I’ve ever seen anything like it,” Hokies coach Kenny Brooks said. “But we just didn’t get the ball to fall in the basket.”

Virginia Tech: The Hokies advanced into the quarterfinals with Thursday’s win against Miami, but have never advanced past that round since joining the ACC for the 2004-05 season. They entered the tournament looking to be in good position to earn their first NCAA bid in Brooks’ fifth year, though last year’s 21-win team seemed set to go too before the tournament was canceled amid the early stages of the coronavirus pandemic.

“It’s been a long time coming, but we’ve put together two years where we felt like we’re a winning basketball program,” Brooks said.

N.C. State: Moore’s team won the program’s first tournament title since 1991 last season and lost out on its first regular-season crown since the 1989-90 season by a small win-percentage margin compared to No. 5 Louisville. Cunane’s performance was a positive opening act, while Boyd highlighted her value after Brown-Turner had two points on 1-for-7 shooting and Jones finished with seven points.

“(Boyd) can help take us to another level,” Moore said.

Virginia Tech top scorer Aisha Sheppard (18.8 points per game) struggled to six points on 2-for-15 shooting, including 0 for 6 from behind the arc. That came after she left Thursday’s win against Miami early with an ankle injury.

“She just wasn’t herself,” Brooks said, calling it a “valiant effort.”

The Hokies made 12 3-pointers in the first meeting and 11 in the second. But they made 5 of 21 3s in this one, including 1 of 9 in that frustrating second quarter.

They finished the game shooting 35% from the field.

Virginia Tech: The Hokies must wait to find out their NCAA Tournament fate. 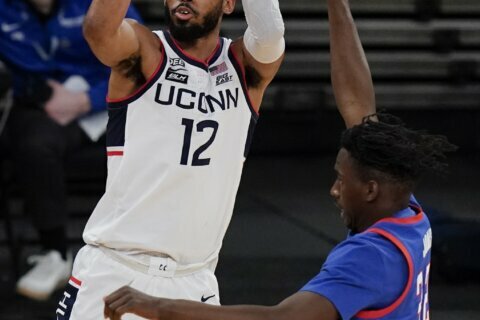