This has been one unlucky March so far: we've already seen more than a few hopefuls' hearts get broken, and the month can certainly be more miserable than memorable for those still playing.
Listen now to WTOP News WTOP.com | Alexa | Google Home | WTOP App | 103.5 FM

Where bids are handed out and bubbles are burst. Where Georgetown needs four wins in four days while Virginia and Virginia Tech are simply playing for seeding. Where Maryland looks into the mirror and wonders if another March meltdown is in the 2021 forecast.

Where teams in Power Five Conferences get nervous anytime there’s an upset in a mid-major conference, because that means there may be a “bid thief” snagging an at-large spot. Where the “9 p.m.” games rarely begin before 9:30-if we’re lucky.

And this has been one unlucky March so far: we’ve already seen more than a few hopefuls’ hearts get broken, and the month can certainly be more miserable than memorable for those still playing.

The Flames beat North Alabama in the A-Sun final, but had already wrapped up the bid the day before, because the Lions were ineligible for the NCAA Tournament as a “transitional” (moving up from Division II) team.

Rough Weekend for the Locals: We’ll even go back all the way to Thursday in the Atlantic 10 Tournament, when George Washington saw its season end in a 73-59 loss to George Mason.

The Patriots’ joy would be short-lived, as Mason fell the following day to Davidson, 99-67. Richmond lost the 8/9 game to Duquesne, 67-62. But VCU emerged with wins Friday and Saturday over Dayton and Davidson.

The Rams advance to the A-10 Championship Game next Sunday (it’s their sixth trip to the finals but their first since 2017).

Meanwhile, both Patriot League schools saw their seasons end Saturday. American’s 89-66 defeat at Army wasn’t much of a surprise, but regular season champ Navy’s 76-68 stumble to Loyola (MD) was quite the shocker (even playing with a limited roster due to contact tracing).

The Phoenix eliminated Towson the day before, 69-48. William & Mary will continue its drought as one of four original Division I schools in 1948 that has yet to reach the NCAA Tournament (Army, The Citadel, and St. Francis (NY) are the others) after the Tribe’s 63-47 defeat to Northeastern.

Maryland (15-12, 9-11 Big Ten) stumbled in its final regular season game Sunday against Penn State. The Nittany Lions closed the night with a 30-11 finish. Coupled with the Terps’ loss at Northwestern, the NCAA Tournament hopes that were once solid are creeping toward the land of limbo.

But that’s not all — because of the loss they slide from seventh (where they’d face an Indiana team that’s lost five in a row) to eighth, where they draw a Michigan State team who is coming off a victory over regular season champ Michigan. It’s an 11:30 a.m. tipoff, too.

Who’s ready to see a sluggish sleepwalk to start the game against the Spartans?

The defeat meant another trip to what is now an expanded Big East Tournament first round (for the fifth time in seven years).

Virginia (17-6, 13-4 ACC) beat Louisville 68-58 on Saturday to wrap up the ACC regular season title for the fifth time in eight years.

Due to COVID-19 and the uneven league schedule, they lost as many games as Florida State and Virginia Tech — two teams that beat the Cavaliers this winter. They’ll face the winner of Syracuse/NC State Thursday at noon in Greensboro.

Virginia Tech (15-5, 9-4) has played just twice in the last month, and spent another week dealing with COVID-19 cancellations. But the Hokies claim the No. 3 seed in the upcoming ACC Tournament, their highest seed since 2007.

They looked sluggish coming off a 17-day layoff in their loss to Georgia Tech. They’ll be off for 12 days when they face the winner of the North Carolina-Notre Dame/Wake Forest matchup. And yes, they draw the famed “9 p.m. quarterfinal game” on Thursday. 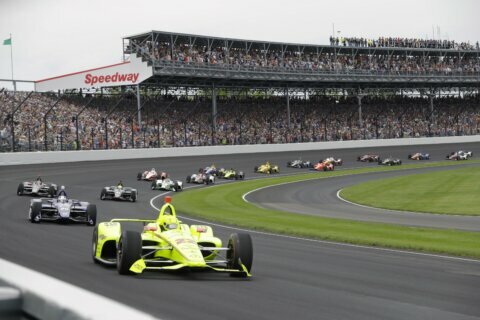