The Warriors and Bucks enter Wednesday in need of one more win to wrap up their respective first-round playoff series.

Golden State’s Game 4 loss at Denver on Sunday denied it a sweep over a Nuggets team that dropped each of the first three games.

Milwaukee has posted back-to-back dominant wins over Chicago and holds a 3-1 lead despite continuing to play without Khris Middleton, whose knee injury in Game 2 of the series forced the defending champions to adjust.

Both front-running teams remain confident as they prepare to play in their home arenas.

Warriors coach Steve Kerr believes playing a closeout game for the first time in two seasons was beneficial to his team, even though it lost.

He also thinks not letting Denver be as physical as it was in Game 4 will be key.

“It’s a lot tougher to play against physicality when every possession is in the half court,” Kerr said. “Our defense can help our offense. Not fouling, letting the game flow is big advantage for us.”

The Bucks have endured without Middleton thanks in part to Bobby Portis. He is averaging 16 points per game and shooting 50% from the field (42% from 3-point range) since being inserted into the starting lineup.

“The guys have been competing,” coach Mike Budenholzer said. “With or without Khris, when we’re good defensively, that usually bleeds into our offense. While we can always get better, I think the defense has been what we’ve leaned on pretty hard here the last couple of games.”

With a second-round matchup against Boston looming, defense will continue to be paramount.

“Everybody has stepped up in his absence,” Wesley Matthews said. “Obviously you can’t just have one person fill what Khris does.”

Here is a look at Wednesday night’s games:

NEED TO KNOW: After the two teams split two close games in Milwaukee, the Bucks have taken command of this series with two lopsided victories in Chicago, a 111-81 drubbing in Game 3 and a 119-95 blowout in Game 4. The Bucks are 1-1 at home, matching their total number of home playoff losses from their title run last season.

KEEP AN EYE ON: Bucks G Grayson Allen. After scoring a total of three points in the first two games, Allen had 22 in Game 3 and 27 in Game 4. Allen reached the 20-point mark just five times in the regular season, and only twice since mid-November. He has shot 11 of 14 over his last two games.

INJURY WATCH: The Bulls announced G Zach LaVine was placed in the health and safety protocols and didn’t travel with the team to Milwaukee Tuesday. But he will continue to test in hopes of being cleared in time for Game 5. Guard Alex Caruso also remains in the concussion protocol, also leaving his status uncertain for Game 5. … Middleton will miss a third straight game with a sprained medial collateral ligament in his left knee. Bucks G George Hill hasn’t played yet in the postseason and remains out with an abdominal strain.

PRESSURE IS ON: The Bulls’ defense. Chicago’s ability to force turnovers and disrupt Milwaukee’s offense made this series competitive early, but the Bucks picked the Bulls apart over the last two games. The Bucks shot 52.3% overall and went 17 of 33 on 3-point attempts in Game 4. This series ends Wednesday if the Bulls don’t get back to defending the way they did in the first two games.

NEED TO KNOW: A late 3-pointer by Will Barton and 37 points from Nikola Jokic helped the Nuggets to a 126-121 win in Game 4. But they nearly squandered a 17-point lead, which doesn’t bode well for Denver. Golden State won by 16 and 20 points at home in Games 1 and 2.

KEEP AN EYE ON: Stephen Curry. The All-Star has come off the bench for the Warriors in each of the first four games, with Kerr steadily increasing his minutes following the foot injury that sidelined him late in the regular season. He was up to 37 minutes in Game 4 and has led Golden State in scoring each of the last three games.

INJURY WATCH: Kerr said Curry has “no limitations” on his minutes. But he declined to say whether Curry will start in Game 5.

PRESSURE IS ON: The Nuggets, who have dropped three straight at Golden State dating back to the regular season. A loss would drop them to 1-8 in their last two playoff series after being swept by Phoenix in the conference semifinals last season. 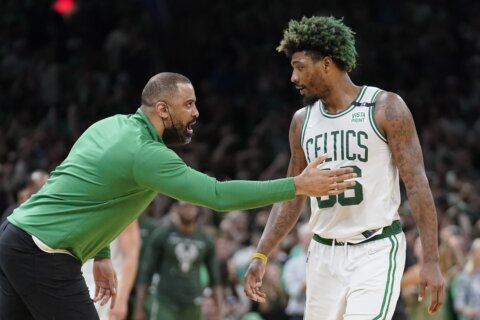