The Nuggets avenged a 108-94 loss to the Thunder on Dec. 22 in Oklahoma City. Denver coach Michael Malone reminded his team that the Thunder outrebounded the Nuggets 60-39 that day. Denver had a 53-41 advantage in the rematch.

“You can defend for 22 seconds, and if you don’t finish off that possession with a defensive rebound, it’s all out the window,” Malone said. “We reminded our guys all day today, this morning at our meeting and pregame that they beat us by 21 on the glass last time. So it was a huge point of emphasis and our guys heard it.”.

Lu Dort scored 14 points for the Thunder, who have lost four straight. Shai Gilgeous-Alexander, who had averaged 22.3 points per game, was held to eight points on 2-for-14 shooting.

Rivers had 14 points in the first half.

“I think the big thing with Austin is sometimes you just got to catch and shoot instead of holding and sometimes dancing with the ball, and he did that tonight,” Malone said. “When he was open, he shot the ball and he shot it extremely efficiently for us.”

The Thunder spent most of the third quarter trimming their deficit and finally took a 75-74 lead on a 3-pointer by Josh Giddey with about two minutes left in the period. Denver led 80-78 heading into the fourth quarter.

Oklahoma City rookie Tre Mann ripped the ball out of Jokic’s grasp, then drove downcourt and found rookie Aaron Wiggins, who took off for a flying right-handed jam that put the Thunder up 93-88 with 4:26 to play.

Rivers had a 3-pointer and an acrobatic layup on back-to-back possessions to put Denver up 95-93. Oklahoma City trailed 97-95 and could have taken the lead in the final minute, but Jeremiah Robinson-Earl’s 3-pointer missed badly with 32 seconds to play.

Denver’s Will Barton drew a blocking foul from Dort with 12.6 seconds left and went to the line. Barton caught Dort with an elbow to the face, but the play was not reviewed, and Barton made both free throws to create the final margin.

Oklahoma City coach Mark Daigneault said he agreed with the foul call against, Dort but thought the play should have been reviewed for a hostile act against Barton.

“In that situation, I’ve got no explanation as to why they didn’t look at that,” Daigneault said. “Not only did they not look at it, which I thought was a no-brainer to at least go and look at the monitor after we saw the replay, but for no explanation of not to look at it, I was a little baffled by that, quite frankly.”

Giddey said the young Thunder will continue to improve as they play more close games.

“There’s nights like tonight where we’re right in the game and we just come out of the wrong end,” he said. “But I think with experience and learning from those games, that’s when, two, three four years from now, in those late-game situations, you understand how to come out with a win. Obviously, Denver is a lot more experienced than we are, and they showed that tonight.”

Nuggets: Signed guard Davon Reed to a two-way contract and waived two-way center Petr Cornelie in a related move. … Outrebounded Oklahoma City 20-9 in the first quarter to take a 36-23 lead. … Guard Facundo Campazzo had one point and eight assists.

Thunder: Eleven Oklahoma City players scored in the first half, but none posted more than six points before the break. … Robinson-Earl scored 12 points, Giddey had 11 points, eight assists and seven rebounds and Darius Bazley added 10 points.

Nuggets: At the Los Angeles Clippers on Tuesday night.

Thunder: At Washington on Tuesday night. 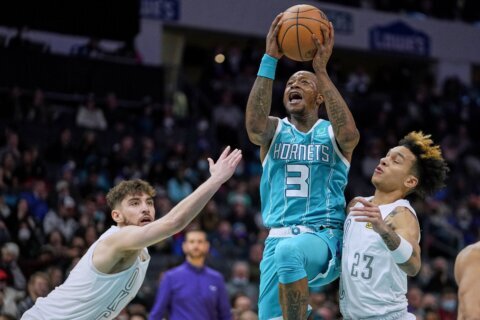 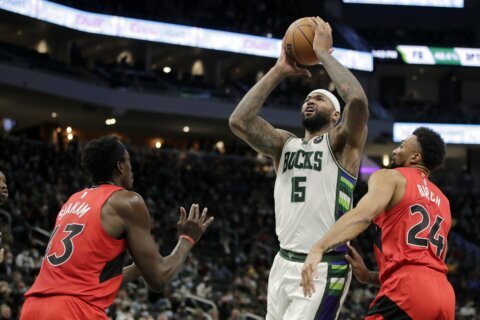