Xavier Tillman had 12 points, while Desmond Bane and Jaren Jackson Jr. finished with 11 each as Memphis snapped a three-game losing streak to the Nuggets.

Nikola Jokic led Denver with 23 points, seven rebounds and seven assists, while Aaron Gordon added 15 points and 10 rebounds. Monte Morris scored 11, but was 5 of 12 from the field — part of the Nuggets shooting 44% for the game.

Denver’s major problems came from outside the arc where it went 9 of 38 for 24%.

It was the first of two consecutive games between the teams. They will face each other again Wednesday night in Memphis.

In a well-played first half, Memphis took a 60-58 lead into the break as both teams shot better than 50% through much of the half. While the Grizzlies held the lead through the bulk of the half, the advantage never reached double digits.

Jokic already had 15 points and a handful of assists at halftime. Morant had 14 points to lead Memphis.

But the Nuggets were struggling from long distance. Jokic was 2 of 5 from 3-point range, but the rest of the team missed 14 of 15. By the time they entered the fourth, the Nuggets were 4 of 24 from outside the arc and Memphis held an 82-73 lead.

The Grizzlies pushed the margin to 14 in the fourth and held on.

Nuggets: Allowed an opponent to reach 100 points for only the second time this season. The only other team to pass the century mark was Utah in a 122-110 Jazz victory. … Gordon left in the third quarter with a right eye injury. He returned in the fourth.

Grizzlies: Morant was added to the injury report Monday afternoon with a sore right elbow but started. Memphis coach Taylor Jenkins said Morant hurt the elbow when he fell in the Miami game Saturday. … Morant got his 1,000th career assist with his first of the game early in the first quarter. …Jones tied a career high for 3-pointers in a regular-season game with five.

There’s no doubt the Nuggets’ game depends heavily on Jokic, no matter how coach Michael Malone mixes his lineup with starters and reserves. “I think our plus-minus with Nikola on the floor is spectacular,” Malone said in his pregame media session. “And I don’t want to talk about what it is when he’s off the floor.”

The teams play the second of a two-game set Wednesday in Memphis. 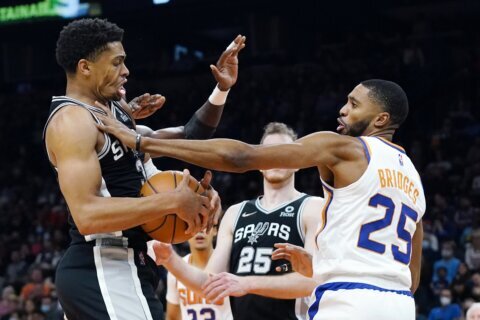