NBA Finals: Why the Suns will win the NBA championship

PHOENIX (AP) — This version of the Phoenix Suns will be a case study for future NBA general managers on how to build a championship contending roster in a hurry.

Roll the dice on an aging — but motivated — Hall of Fame-caliber point guard (Chris Paul) and pair him with a veteran coach who he knows and respects (Monty Williams). Add a few more savvy veterans who have been deep in the playoffs before (Jae Crowder and Torrey Craig). Then combine them with a talented young nucleus that was hungry for the wisdom they provide (Devin Booker, Mikal Bridges, Deandre Ayton).

Voila! A playoff juggernaut is born.

“It’s been a long time coming,” Booker said after beating the Clippers to advance to the NBA Finals last week. “We’ve seen the bottom, the bottom of the bottom for multiple years, and just keeping our head down. Waiting on this moment right here. Monty coming in, building the culture, him leading us with the preparation meets opportunity.

“That was these moments right here, and we took it and we ran with it.”

There’s no reason to believe it stops over the next two weeks in the NBA Finals. The Suns have a healthy, deep roster that has responded to every challenge it’s faced and rolled through these playoffs with a 12-4 record. Game 1 is Tuesday in Phoenix.

The 36-year-old Paul is an ageless wonder who appears to be peaking in thsee playoffs at the right time. He battled a shoulder injury in the first round against the Lakers and missed two games against the Clippers because of COVID-19, but he was brilliant in the Game 6 closeout win over Clippers, scoring 41 points on 16 of 24 shooting.

Booker and Ayton have been terrific in the postseason despite their relative lack of experience. The 6-foot-5 Booker has carried a big load of the scoring, averaging 27 points per game, with an old-school mid-range game that opposing teams know is coming but can’t seem to stop.

Then there’s Ayton, who has been a revelation in these playoffs. The Suns have been chided in the past for taking Ayton with the No. 1 overall pick in 2018 ahead of stars like Luka Doncic and Trae Young, but Ayton is the first to be playing in the NBA Finals.

The ultra-athletic 6-foot-11 center has arguably been the most important piece of this team. He’s averaged 16.2 points, 11.8 rebounds, shot a ridiculous 70.6% from the field and provided stout interior defense against some of the league’s best big men.

He also already has game-winning bucket that will live in Suns playoff lore forever after he stuffed home an alley-oop pass from Jae Crowder with 0.7 seconds left to give the Suns a thrilling 114-113 win over the Clippers in Game 2.

Now the Suns are embracing the opportunity to win the franchise’s first NBA championship.

It’ll happen. The pieces fit together perfectly and there’s some mojo going on in the desert. 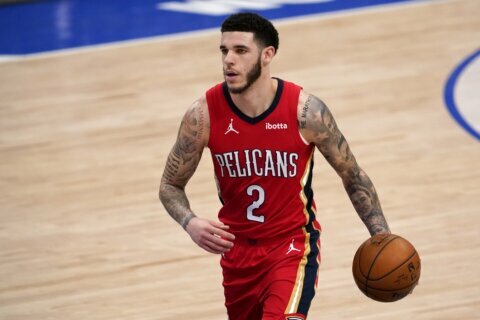