NEW YORK (AP) — The last time the New York Knicks had a winning streak this long was also their last playoff appearance.

Julius Randle had 31 points and 10 rebounds, RJ Barrett added 25 points and 12 boards, and the Knicks beat the Toronto Raptors 120-103 on Saturday for their ninth straight victory.

Derrick Rose scored 19 points for the Knicks, who are on their longest winning streak since a 13-game run late in the 2012-13 season, when they won the Atlantic Division title.

“We’re peaking but we can still get a lot better,” Randle said. “Obviously offensively we’re playing well, but defensively for a full 48 minutes I feel like we can be a lot better.”

The Knicks have moved into fourth place in the Eastern Conference with 11 games remaining and improved to 21-10 at home, where an announced crowd of 1,981 fans sounded louder at a time of year when basketball season is usually over at Madison Square Garden.

“Since the fans have been back it’s been amazing winning here,” Barrett said. “They give us such a boost and we’re really playing hard together because we want to make them proud.”

Randle, coming off a 40-point performance Wednesday against Atlanta, had 20 more by halftime Saturday. The Knicks then broke open a close game while he was on the bench to start the fourth quarter and Barrett made the big shots down the stretch to turn away his hometown team.

“That’s the best part about our team,” Knicks coach Tom Thibodeau said. “Julius is our engine but we have a lot of guys stepping up.”

Fred VanVleet and OG Anunoby each scored 27 points for the Raptors, who were trying for a season-high fifth straight victory. The entered the day tied for 11th, a game behind surging Washington for the final play-in position in the East.

There were 14 lead changes in the first three quarters and neither team led by more than nine, before the Knicks opened the fourth with a big burst.

Toronto never really got close and the Knicks won the season series for the first time since 2010-11.

“It was weird. I told the team in the locker room, I said, ‘We really executed things pretty well,’ and then it didn’t work out,” Raptors coach Nick Nurse said. “I guess it was just, again, they made them, we didn’t make them.”

The Knicks shot 61% in the first half and opened their biggest lead at 55-46 when Reggie Bullock made his third straight 3-pointer. They led 64-59 at halftime.

Pascal Siakam had 26 points for the Raptors but Kyle Lowry was 1 for 10, missing all eight 3-pointers.

Raptors: Chris Boucher missed first game after spraining the MCL in his left knee on Wednesday, an injury that will keep him out at least a week. He had been the only Raptors player to appear in all 59 games. … Rodney Hood (right hip) missed his second straight game. He warmed up before the game before it was determined he wouldn’t play.

With Stephen Curry rolling for Golden State and Russell Westbrook and Bradley Beal carrying Washington to seven straight wins, there’s a couple teams that look dangerous if they hold onto places in the play-in tournaments.

Then there’s the Raptors, who don’t have that kind of individual talent. But they finally got the core of their team — VanVleet, Siakam, Anunoby and Lowry — back together Wednesday against Brooklyn for the first time since March 29, giving Nurse the belief the 2019 NBA champions might be capable of making noise from the bottom if they keep improving.

“The other night was our first step kind of back and we did show some flashes at the end that we’re not hat far away,” Nurse said. “But I think we’re going to need to grow in these next 12 games and if we do, then I think we’re hard to beat.” 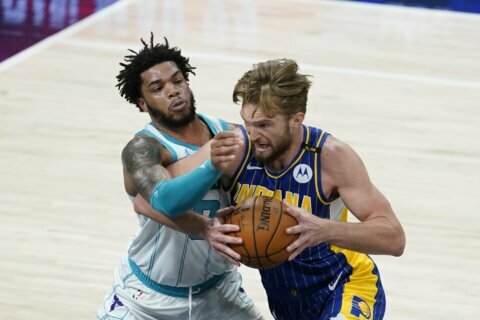