NEW ORLEANS (AP) — Brandon Ingram and Zion Williamson took what they hope will be meaningful steps in turning the New Orleans Pelicans’ season around, combining decisively to produce pivotal plays during a memorable comeback.

Ingram highlighted a 33-point performance by hitting a go-ahead 3-pointer with 33.3 seconds left in overtime, and New Orleans held on for 120-115 victory over the Boston Celtics on Sunday after rallying from 24 points down in the third quarter.

“Today was a day of encouragement,” Ingram said. “We just stayed together and everybody did things that they do well.”

Zion Williamson scored 24 of his 28 points after halftime and had 10 rebounds, four assists and a block for the Pelicans, who narrowly avoided losing for the sixth time in seven games. Josh Hart, who was instrumental in the comeback, had 17 points, 10 rebounds, three blocks and a steal.

“We stayed true to who we were. We rallied back,” Williamson said. “Everybody — coaches, players, ball boys — everybody was just engaged.”

Jayson Tatum had 32 points and nine rebounds, and Jaylen Brown scored 25 for the Celtics, who appeared to be cruising to their third victory in four games when Tristan Thompson’s free throws gave Boston a 79-55 lead in the middle of the third quarter.

“We kind of got away from what got us the lead, not moving the ball, guarding, and they stormed back,” Brown said. “This one definitely hurts. It’s tough. Just a tough loss — a game we 100 percent should have won.”

Added Tatum, “If we want to be a really good team, we’ve got to put teams away early, especially being up 20-some points.”

The Pelicans finished the third period on a 19-8 run, capped by Williamson’s layup after he drove nearly the length of the court to score with less than 2 seconds on the clock.

The momentum carried into the fourth.

Williamson’s put-back dunk ignited a 10-2 run during which Hart scored eight. The spurt included his driving layup as he was fouled, a 3 and a reverse put-back after Lonzo Ball’s fast-break layup had been blocked by Daniel Theis.

New Orleans pulled even when Ingram’s transition 3 made it 98-all with 4:10 left, setting up a riveting finish to what had looked like a laugher.

The lead changed hands twice in the last 11 seconds of regulation, with Tatum draining a fall-away to make it 106-105 and Williamson hitting a layup as he was fouled to put the Pelicans up 108-106 with 6.9 seconds to go. Tatum then sank a driving floater in the final second to force overtime.

The game was tied at 112 when Ingram’s 3, set up by Williamson’s pass, put the Pelicans in front to stay.

The Celtics controlled most of the first half, scoring 19 points off of 10 New Orleans turnovers.

Tatum exploded for 17 points in the second quarter, when Boston led by as many as 19 before taking a 63-47 lead into halftime.

“We played exceptionally well for a large part of the time,” Brown said. “We just got to mature and grow up.”

Celtics: Coach Brad Stevens said Marcus Smart, who has not played since injuring his calf during a Jan. 30 loss to the Lakers, is traveling with the team. But while Stevens said Smart has been “going at a decent rate the last few days,” he stressed that it remains uncertain when Smart will be ready to play. … Thompson and Kemba Walker each scored 14 points and Aaron Nesmith scored 10. … Robert Williams III grabbed 13 rebounds, blocked four shots and scored eight points.

Pelicans: Ball scored 16 points and Willy Hernangomez grabbed 13 rebounds. … JJ Redick was ejected after committing a pair of technical fouls within the first minute of the fourth quarter. His first technical came while arguing, the second after he hastily bounce-passed the ball to an official after Boston’s Nesmith was called for fouling him on a drive. Coach Stan Van Gundy said he told Redick, “I don’t remember too many guys getting ejected on a call that went their way.”

Van Gundy was gratified the see his club rally from a big second-half hole just one game after seeing an 11-point fourth-quarter lead turn into an 18-point loss during a dreadful final 12 minutes against Phoenix on Friday.

Celtics: Visit Dallas on Tuesday night in the second game of a three-game trip that ends in Atlanta. 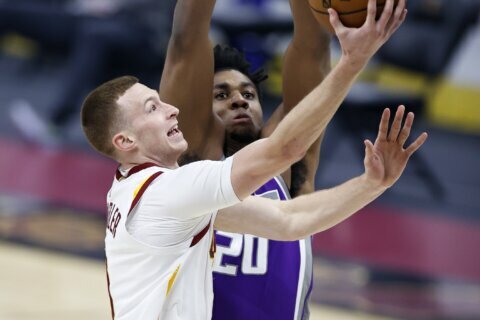