Man who had more than 200 firearms at home pleads guilty

PROVIDENCE, R.I. (AP) — A Rhode Island man who had more than 200 guns and thousands of rounds of ammunition at his home pleaded guilty on Wednesday to lying to federal authorities about his drug use when he purchased the weapons.

Ronald Andruchuk, 38, admitted that he was an unlawful user of controlled substances, including cocaine, when he purchased the weapons, and that he misled the Bureau of Alcohol, Tobacco, Firearms, and Explosives when he wrote on agency forms that he was not an unlawful drug user, U.S. Attorney Zachary Cunha said in a statement.

Under a plea deal, Andruchuk will forfeit 219 guns, more than 25,000 rounds of ammunition and other items seized by police at the Burrillville home that he shared with his wife and three children, prosecutors said. The guns will be destroyed.

Police went to the home last February to invesigate complaints from neighbors about gunfire. They said that as officers arrived, they heard gunshots and bullets passing over their heads. Andruchuk was found to be in possession of methamphetamine at that time, and he was arrested on a charge of firing in a compact area, prosecutors said. A federal search warrant served at the home turned up more than 200 unsecured weapons strewn about the house and more drugs.

The ATF reviewed firearm transaction records that Andruchuk filled out on Nov. 17, 2021, and Dec. 11, 2021, while attempting to buy firearms at two Rhode Island gun stores and discovered he had falsely claimed he was not “an unlawful user of, or addicted to, marijuana or any depressant, stimulant, narcotic drug, or any other controlled substance,” prosecutors said.

Sentencing is scheduled for April 17.

Andruchuk was detained in March when a Magistrate Judge determined that evidence of his “explosive expressions of rage and acts of violence,” a firearms “obsession that has led to neglect of the family,” and a “deep and intractable” level of mental health and substance abuse disorders made his detention the only way to protect the public.

Prosecutors have also said that he was manufacturing ghost guns, which are assembled from kits and do not have serial numbers, making them hard to trace.

An email seeking comment was sent to Andruchuk’s attorneys.

Andruchuk’s attorneys have in the past described him as a firearms collector. They said the guns were in a locked basement where the children had no access. 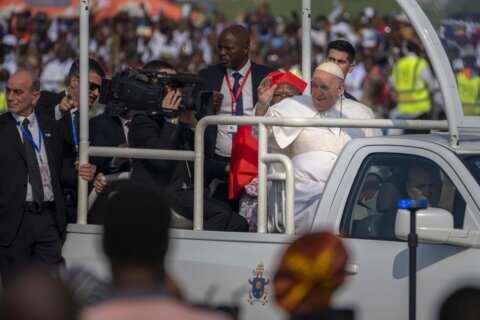 In Congo, activists look to Pope to boost forest protections