Hamlin in their hearts, the NFL pays tribute to No. 3

Hamlin's number — number “3” — was on display everywhere across the league, outlined on 30-yard lines on fields, worn on special patches on the Bills uniforms and featured on jackets and sweatshirts and even on red hearts dangling from the tailgate tents outside the Bills home stadium.
Listen now to WTOP News WTOP.com | Alexa | Google Home | WTOP App | 103.5 FM
(1/15) 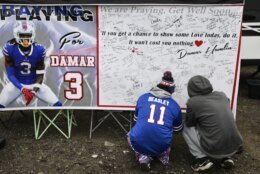 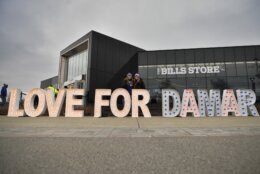 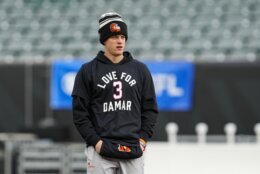 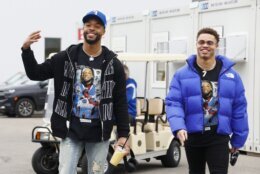 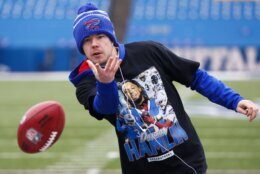 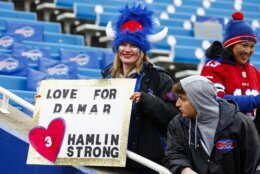 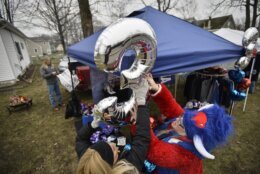 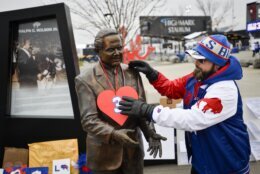 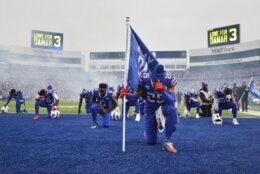 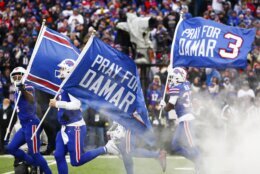 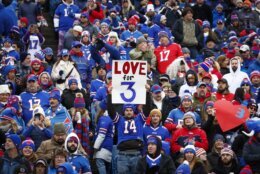 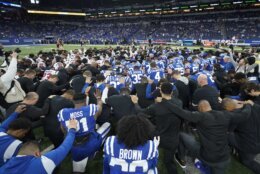 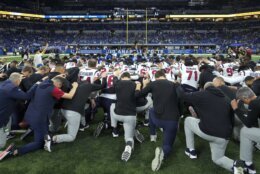 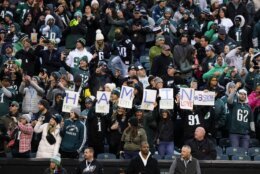 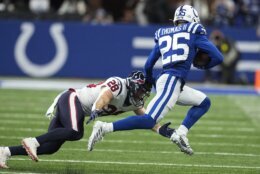 ORCHARD PARK, N.Y. (AP) — Damar Hamlin’s old high school teammate clutched the ball he had just intercepted, jogged to the 30-yard line, gingerly placed the pigskin at the top of the red-outlined “3,” raised his hands over his head and formed them in the shape of a heart.

“I’m just glad I got a chance to go out there and make a play and honor him the way I did,” said Hamlin’s buddy, Colts safety Rodney Thomas II.

Thomas’ gesture might have been the most poignant moment, but it was far from the only shout-out to the Bills safety on an NFL Sunday filled with love for a stricken player whose impact is being felt across the nation.

Hamlin’s number — number “3” — was on display everywhere across the league, outlined on 30-yard lines on fields, worn on special patches on the Bills uniforms and featured on jackets and sweatshirts and even on red hearts dangling from the tailgate tents outside the Bills home stadium.

The highest volume of tribute poured in, naturally, from that parking lot in Orchard Park, New York, where Buffalo’s 35-23 victory over New England was punctuated by a 96-yard kickoff return for a touchdown by Nyheim Hines on the game’s opening play.

The safety, whose recovery after his collapse on the field Monday night in Cincinnati has overtaken every NFL story line, also shared a photo of himself making a heart with his hands from his hospital bed shortly before kickoff with the text “GAMETIME!!! @BuffaloBills.”

Before that, in the lot outside of Highmark Stadium, Ryan Magnuson stood in front of a 4-x-10-foot canvas greeting card that he placed at the foot of the Bills stadium entrance for fans to sign. The message on the card: “If you get a chance to show some love today, do it. It won’t cost you nothing” — a reprise of a tweet Hamlin sent back in 2021.

“It’s been very positive. I’ve seen Bills fans, I’ve seen Patriots fans and people wearing other NFL jerseys coming up. I think this is bigger than a team thing at this point,” Magnuson said.

Fifteen-hundred miles away, and three hours later in Denver, the Chargers and Broncos each walked to the numbers and linked arms near their respective sidelines before the game’s first snap while the No. 3s on both teams — Russell Wilson and Derwin James Jr. — met at the 50-yard-line, shook hands and kneeled in prayer.

Philly running back Miles Sanders tweeted a picture of himself, wearing a “Love For Damar” sweatshirt, and flashing the number “3” while FaceTiming with Hamlin from his hospital.

Not all was warm and fuzzy.

In Cincinnati, Bengals running back Joe Mixon celebrated a touchdown by mimicking a coin flip — the likes of which could have happened, per a late NFL contingency plan — to decide home-field advantage in a potential playoff game between the Bengals and Ravens.

Cincinnati’s 27-16 win over the Ravens on Sunday staved off that possibility. The Ravens will visit Cincy next week in the wild-card round. But saying all is back to normal in the NFL this week, or for the upcoming playoffs, still feels like a bit of a stretch.

The postseason is bound to be outfitted in “Love For Damar” sweatshirts and others embroidered with “Hamlin Strong,” the likes of which Chiefs quarterback Patrick Mahomes wore during Saturday’s win over the Raiders. Some might even wear shirts being sold by Hamlin himself, with proceeds going to first responders and the University of Cincinnati Medical Center, where he’s been since he collapsed on the field and had to have his heartbeat restored by medical staff last Monday.

It is bound to be filled with reminders that the high stakes of these games are about more than a trophy to be awarded at the end of the Super Bowl.

It is bound to feel a little bit off. If the Chiefs and Bills advance to the AFC title game, for instance, that game will be played on a neutral field, in a city still to be determined.

The heart of this league was beating most strongly in Buffalo on Sunday.

Sue Sonner wore a former Bills quarterback EJ Manuel’s No. 3 jersey; her husband creatively covered over Manuel’s name and replaced it with Hamlin’s.

“It’s going to be very emotional. I’m taking some tissues with me for sure,” said Sonner, who is from Corning, New York, and was also in the stadium in Cincinnati last Monday.

“We could see the scurry and the trauma and the panic and all of that. So very somber, very somber environment,” she said. “Now that he’s progressing and we think he’s going to be okay, now we’re excited to play football again. And hopefully he’s on the road to recovery.”