As hundreds of students mourned together inside the University of Idaho's stadium Wednesday night, family members of four slain classmates urged them to raise their eyes from grief and focus on love and the future.
Listen now to WTOP News WTOP.com | Alexa | Google Home | WTOP App | 103.5 FM
(1/18) 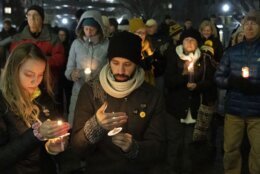 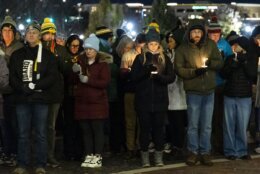 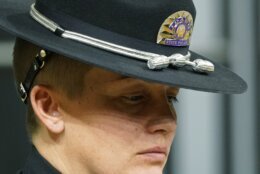 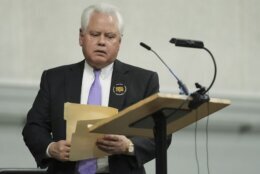 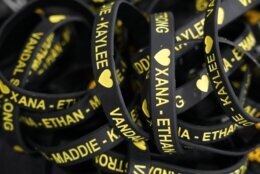 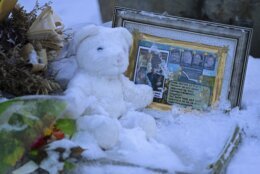 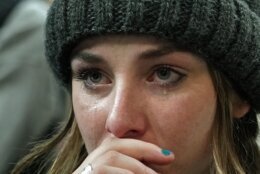 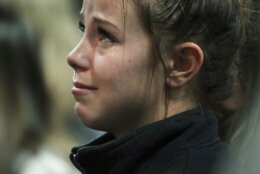 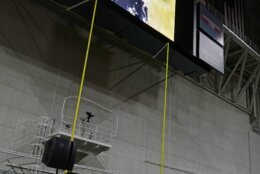 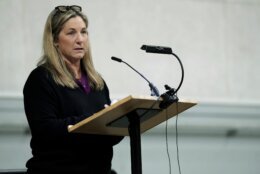 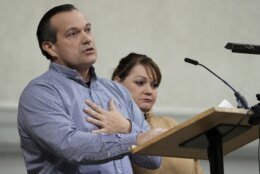 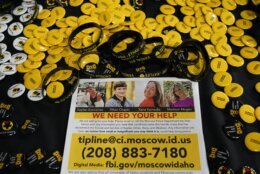 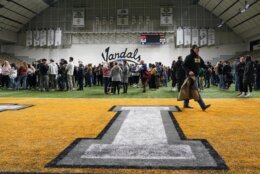 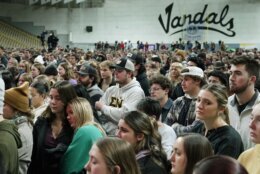 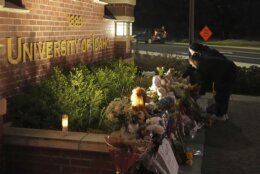 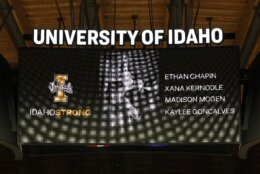 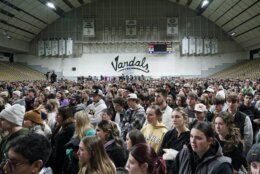 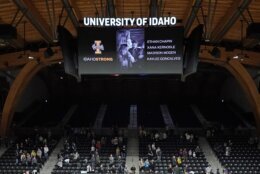 BOISE, Idaho (AP) — As hundreds of students mourned together inside the University of Idaho’s stadium Wednesday night, family members of four slain classmates urged them to raise their eyes from grief and focus on love and the future.

Some in the crowd held each other and wiped their eyes as they remembered Kaylee Goncalves, 21, of Rathdrum, Idaho; Madison Mogen, 21, of Coeur d’Alene, Idaho; Xana Kernodle, 20, of Post Falls, Idaho; and Kernodle’s boyfriend, Ethan Chapin, 20, of Mount Vernon, Washington. The four were stabbed to death Nov. 13 at a rental home near campus in the quiet university town of Moscow, Idaho, and law enforcement has yet to name a person of interest in the case. Fears that the killer could strike again has prompted many students to finish the semester by taking online classes from the perceived safety of their hometowns.

As a result, similar scenes played out across the state as simultaneous candlelight vigils were held in multiple cities. In downtown Boise, several hundred people cupped their hands around candle flames outside a University of Idaho’s building. High schools in some cities lit up their athletic fields in a sign of solidarity. Homeowners were urged to leave their porch lights on as a gesture of support.

Ben Mogen, Madison’s father, told the crowd in Moscow that she was his only child, so “everything she ever did was such a big deal.” Talking about “Maddie,” was his pride, Mogen said, and the two loved attending music concerts together.

“When I would meet people ever since she was first born, and they would say, ‘Tell me about yourself,’ the first thing I would say is, ‘I have this daughter — here’s a picture of her, she’s on the dean’s list at college, she works hard, she has all these friends at her sorority,'” Mogen said.

Madison’s best friend was Kaylee. The girls met as sixth graders, Kaylee’s father Goncalves told the crowd, and were inseparable friends from that moment on.

“They went to high school together, then they started looking at colleges, they came here together. They eventually got into the same apartment together,” Steve Goncalves said. “And in the end, they died together, in the same room, in the same bed.”

“It’s a shame and it hurts, but the beauty of the two always being together comforts us,” he said.

Xana Kernodle’s family was unable to attend the vigil.

Ethan Chapin’s mother, Stacy Chapin, fought back tears as she said she was there with her husband and with Ethan’s triplet brother and sister.

Like other families, the Chapin family always tried to eat dinner together when time allowed and spent countless hours taking the kids to various sporting events when they were younger. The triplets chose the University of Idaho because they wanted a small town and a beautiful campus with a thriving Greek system, she said.

Now, despite the terrible circumstances of Ethan’s death, the family is “eternally grateful that we spent so much time with him,” Chapin said.

“That’s the most important message we have for you and your families — it’s make sure that you spend as much time as possible with those people, because time is precious and it’s something you can’t get back,” Chapin said.

Little new information has been released about the investigation into the killings. A county coroner said the four were likely asleep when they were attacked. Investigators have yet to find the fixed-blade knife used in the killings.

Gov. Brad Little announced last week that he was directing up to $1 million in state emergency funds for the investigation. The FBI has assigned 44 people to the case — half of them stationed in Moscow — and the Idaho State Police has 15 troopers helping with community patrols and another 20 investigators working the case.

“We understand there is a sense of fear in our community,” the Moscow Police Department wrote on Nov. 27. Since the killings, the number of people requesting welfare checks, in which an officer is sent to check on a person’s wellbeing, has doubled.

The university has also seen an increase in people calling its “Vandal Care” phone line to report that they were struggling or worried someone else was struggling with an issue, the university’s Dean of Students Blaine Eckles said earlier on Wednesday.

“While I personally am very confident that the police will resolve (the deaths), until that happens, no one is resting easy,” he said. “There’s someone out there that took the lives of four of our Vandals, and we don’t know who they are. We don’t know where they are.”

This story has been updated to correct the spelling of Ben Mogen’s last name.