Macron met with political leaders and strolled through New Orleans’ historic French Quarter, the heart of the city, stopping to talk and shake hands with bystanders. He paused next to a street brass band and nodded and clapped as they played “When the Saints Go Marching In.”

Macron also said he met with billionaire Elon Musk for what he called a “clear and honest discussion” about Twitter, days after a top European Union official warned the social media platform’s new owner that the company must do more to protect users from harmful content.

The visit is the first by a French president since Valery Giscard d’Estaing traveled to Lafayette and New Orleans in 1976. The only other French president to visit Louisiana was Charles de Gaulle in 1960.

“This state visit enables us to put France, and with France Europe, at the heart of the American agenda. That’s a good thing,” Macron told journalists in French, according to a translation from pool reporters.

Macron told Edwards he was overcome by the reception in the city.

“What I think this signifies is a special relationship we have with France. It is historical and cultural,” Edwards said.

Edwards, a Democrat, has been outspoken about the perils of climate change in a state where tens of thousands of jobs are tied to the oil and gas industry. This makes the stop to New Orleans “very emblematic” of climate-related efforts, French officials said.

During a brief meeting in the presence of Macron, the governor and the Minister for Europe and Foreign Affairs, Catherine Colonna, signed a memorandum of understanding “to further expand and enhance the strong cultural connections between France and Louisiana in the areas of the economy, clean energy and the environment,” Edwards’ office said.

“Like me, President Macron believes that climate change is real,” Edwards said.

The governor’s office said the agreement formally creates a Louisiana-based position for a French technical expert on the transition to clean energy.

During Macron’s visit to Washington on Thursday, he and President Joe Biden released a joint statement expressing “their deep concern regarding the growing impact of climate change and nature loss” and said they “intend to continue to galvanize domestic and global action to address it.”

On Friday evening Macron posted a photo on Twitter of his encounter with Musk, the two men sitting across from each other at a table in an empty room. He said he and the Tesla CEO discussed “future green industrial projects,” and also the social media platform.

“Transparent user policies, significant reinforcement of content moderation and protection of freedom of speech: efforts have to be made by Twitter to comply with European regulations,” the president said in one of a series of tweets.

Earlier this week Thierry Breton, the EU’s commissioner for digital policy, told Musk that Twitter will have to significantly increase efforts to comply with new rules known as the Digital Services Act that take effect next year, or potentially face hefty fines or even a ban in the continental bloc.

Louisiana is named for Louis XIV, the famous Sun King who ruled France for 72 years starting in 1643. New Orleans is where the Louisiana Purchase was finalized. The deal transferred the Louisiana Territory, which encompassed much of what is today the central United States, from France to the U.S. in 1803.

Macron’s New Orleans visit included a stop with first lady Brigitte Macron at the Cabildo, where ceremonies marking the land transfer were held.

Macron was also scheduled to visit the New Orleans Museum of Art and dine downtown before departing.

Holding the U.S. and French flags, Christiane Geisler, who was born in France and moved to Louisiana six years ago, was one of the spectators who stood in the streets hoping to see the president Friday. She was thrilled that she got to shake Macron’s hand and have a brief conversation with him in French.

“For me, when I moved here, it had a good feeling of French,” Geisler said.

The French Quarter, 13 blocks long and roughly six wide, was first settled in the 1700s and was later ravaged twice by fire. It best known as a tourist spot and commercial district where a reimagined French Market, fine restaurants, antique shops and art galleries coexist alongside T-shirt shops, strip joints and bars blasting live music by cover bands.

Jeffrey Collins in Columbia, South Carolina, contributed to this report. 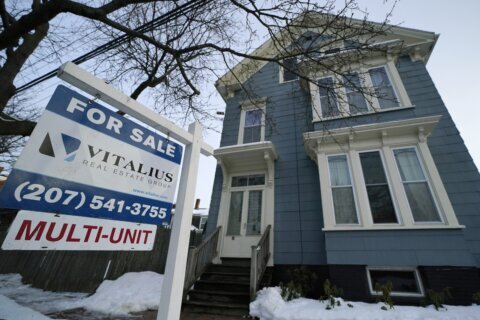