Actor tells jury Kevin Spacey abused him when he was 14

NEW YORK (AP) — An actor who’s accused Kevin Spacey of making a sexual advance on him as a 14-year-old recounted the episode for a New York City jury on Friday, testifying he felt helpless when Spacey climbed on top of him in bed.

“I was frozen,” Anthony Rapp said on the second day of a civil trial in Manhattan. “I was pinned underneath him. I didn’t know what to do.”

In a halting voice, Rapp testified that the then-26-year-old Spacey had invited him to a party at his Upper East Side apartment when both actors were starring on Broadway in 1986. He said after he wandered into a bedroom to watch TV and get away from adults, an intoxicated-looking Spacey joined him after the other guests had left.

Rapp said Spacey, after lifting him and laying him down on the bed, pressed the “full weight” of his chest and groin into him. He said he found a way to slip away and flee the apartment, but not before Spacey asked, “Are you sure you want to leave?”

Asked by his lawyer how he would respond to anyone who downplayed the severity of what happened, Rapp responded by describing himself as a frightened child trying to fend off a grown man.

He added: “I’m grateful that that 14-year-old boy had the wherewithal to get away. I’d also say he shouldn’t have gone through that in the first place.”

As Rapp, sometimes taking deep breaths, testified, Spacey wrote notes on a pad or sat with his hands folded.

Rapp, 50, came forward with the accusation in 2017, when he was the first among others who largely shut down Spacey’s career with multiple claims of inappropriate touching or sexual advances.

At the time, Spacey was starring in Netflix’s political thriller “House of Cards.” He’s also known for his role in the 1999 film “American Beauty,” which won him an Academy Award.

As a teenager, Rapp acted in films including “Adventures in Babysitting.” He was later part of the original Broadway cast of “Rent,” and is now a regular on “Star Trek: Discovery” on television.

The trial’s first witness, Andrew Holtzman, claimed Spacey made a similar move on him years earlier.

Holtzman, now 68, testified that he was working in his office at the New York Shakespeare Festival in the summer of 1981 when Spacey entered and sat at a spare desk used by actors and others who worked for the company of seven theaters.

Holtzman said Spacey didn’t say anything when he entered the office in a windbreaker, “tight blue jeans,” and carrying a leather shoulder bag, but he recalled knowing him because he’d seen his picture in the program for a play, “Henry IV,” in which Spacey was performing at the time.

As he finished a telephone call, Holtzman stood up at his desk and a sexually aroused Spacey walked over to him, lifted him up by the crotch and put him on the desk, Holtzman recalled.

“What are you doing? Get off of me!” he said he told Spacey.

“I could feel his erection on my body,” Holtzman said.

After a few more minutes, Spacey got off him, grabbed his windbreaker and bag and stormed from the office, Holtzman said.

Rapp is seeking $40 million in damages for the psychological injuries he says he sustained as a result of the encounter with Spacey. He will return to the witness stand when the trial resumes on Tuesday. 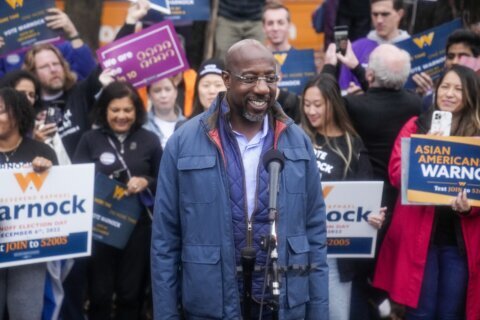