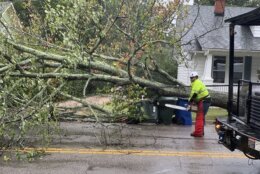 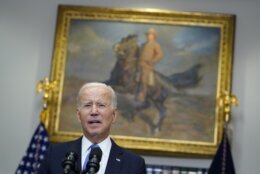 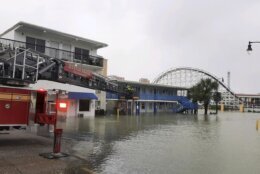 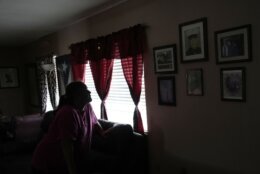 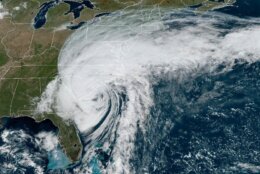 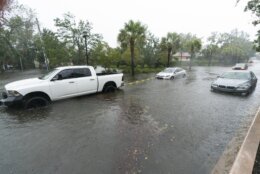 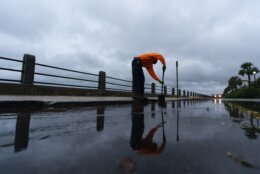 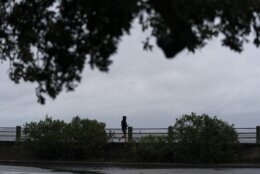 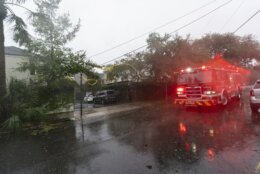 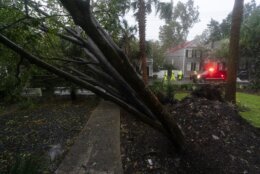 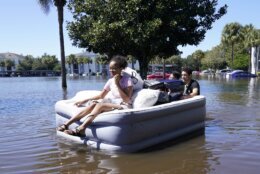 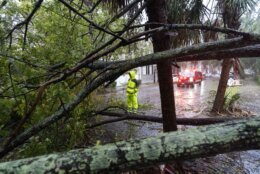 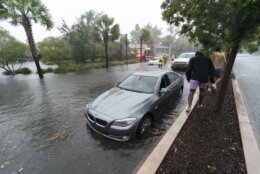 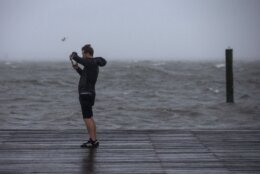 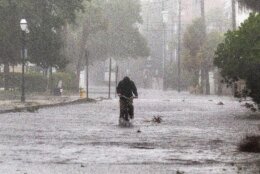 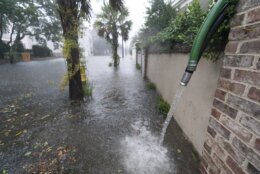 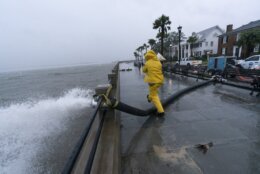 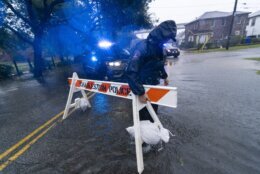 The Latest on Hurricane Ian:

TALLAHASSEE, Fla. — The U.S. death toll from Hurricane Ian has risen to 27 as of Friday night.

According to Florida’s Medical Examiners Commission, several new deaths were attributable to the storm, including a 62-year-old woman who died after suffering injuries and drowning when a tree fell on a mobile home, a 54-year-old man who was found trapped in a window after drowning, and a female who was found tangled in wires under a residence in Lee County.

Other deaths reported earlier included a 22-year-old woman who was ejected from an ATV rollover Friday because of a road washout in Manatee County and a 71-year-old man who died of head injuries when he fell off a roof while putting up rain shutters on Wednesday.

Another three people died in Cuba earlier in the week as the storm churned northward. The death toll was expected to increase substantially once emergency officials have an opportunity to search many of the hardest-hit areas.

— DeSantis shifts from provocateur to crisis manager after Ian

— After Ian, the effects in southwest Florida are everywhere

The U.S. death toll from Hurricane Ian has risen to 17 as Florida authorities on Friday afternoon confirmed several drowning deaths and other fatalities.

The Florida Department of Law Enforcement said the deaths included a 22-year-old woman who was ejected from an ATV rollover on Friday because of a road washout in Manatee County and a 71-year-old man who died of head injuries when he fell off a roof while putting up rain shutters on Wednesday. Many of the other deaths were drownings, including a 68-year-old woman who was swept into the ocean by a wave.

Another three people died in Cuba as the storm made its way north earlier in the week. The death toll was expected to increase substantially when emergency officials have an opportunity to search many areas hardest hit by the storm.

MIAMI, Fla. — Major river flooding is expected to continue across parts of central Florida into next week as post-tropical storm Ian continues making its way up the East coast, according to the National Hurricane Center.

In an update late Friday afternoon, the agency advised that considerable other flooding will also occur into the evening in both North and South Carolina, as well as southeast Virginia, and local flooding could be expected in portions of northwest North Carolina and southern Virginia into early Saturday morning.

Although the intensity of the storm has decreased from hurricane strength, agency officials warned of life-threatening storm surge along the coasts of the Carolinas Friday night.

MYRTLE BEACH, S.C. — A commercial fishing boat anchored in the ocean near Myrtle Beach broke free and washed ashore on Friday, but no one was aboard, according to city police spokesman Master Cpl. Tom Vest.

The U.S. Coast Guard was called out to the boat on Thursday when it had mechanical problems, Vest said. Everyone got off the boat and it was anchored in the ocean near 82nd Avenue North. At some point Friday, however, the boat broke free and police began getting calls about the boat as it traveled about 8 miles (13 kilometers) south to the beach near Williams Street, he said.

Officials believe fluids were leaking from the boat and there was a strong smell of fuel, Vest said. Authorities have warned the public to stay away from the boat, saying it was extremely dangerous.

CHARLESTON, S.C. — Ian has dropped from a hurricane to a post-tropical cyclone as it moved across South Carolina.

The brunt of the surge and waves from the Category 1 storm hit around Myrtle Beach on Friday.

Police said the Pawley’s Island Pier was washed away first. Then local TV footage showed sections missing of the Cherry Grove Pier near North Myrtle Beach and the Apache and Second Avenue piers in Myrtle Beach.

An 85 mph (137 kph) wind gust was measured at Fort Sumter, the tiny island where the Civil War began about 4 miles (6.4 km) from downtown Charleston, the National Weather Service reported.

More than 200,000 customers were without power Friday afternoon in South Carolina as Ian moved onshore.

The story above has been corrected to clarify that parts of four piers in South Carolina were washed away — not entire piers.

ORLANDO, Fla. — University of Central Florida students living at an apartment complex near the Orlando campus, made homeless by the flooding, retrieved possessions Friday from their water logged units. Andee Holbert, her sister and their dog left their apartment Thursday before the water reached their heads. They returned Friday to retrieve wet clothes in garbage bags and whatever other possessions they could salvage, loading them onto their father’s pickup truck.

“We still had power, which is terrifying, and the lights were still on,” said Holbert, a nursing student. “And there’s knee deep water in there.”

Deandra Smith, also a nursing student, stayed in her third floor apartment with her dog after being asleep while others evacuated. On Friday, other students helped get her to dry land by pushing her through the flooded parking lot on a pontoon. She wasn’t sure if she should go back to her parents’ home in South Florida or find a shelter so she can still attend classes. “I’m still trying to figure it out,” she said.

RALEIGH, N.C. — Power outages have increased and some coastal rivers rose in North Carolina as heavy rain and winds from Hurricane Ian crept into the state Friday from the storm’s South Carolina landfall.

Gov. Roy Cooper says adjustments to the projected path of Ian could bring more trouble to central and eastern North Carolina than earlier believed. But he says the state’s emergency equipment and services have been staged to maximize flexibility.

He warns residents statewide to remain vigilant, given that up to 8 inches (20.3 centimeters) of rain could fall in some areas, with high winds.

More than 55,000 customers in North Carolina were without power as of mid-afternoon, according to PowerOutage.us, which aggregates outages nationwide.

COLUMBIA, S.C. — A second pier in northern South Carolina has been destroyed by Hurricane Ian’s surge.

Local television footage showed the middle section of the Cherry Grove Pier near the North Carolina state line was washed away Friday afternoon by rising water and churning waves as Ian made landfall about 50 miles (80 kilometers) down the coast in Georgetown.

The area saw the brunt of the surge as Ian hit the United States again with flooded neighborhoods and widespread power outages.

MIAMI — Hurricane Ian has made another landfall, this time in South Carolina, after carving a swath of destruction across Florida earlier this week.

US Medal of Honor recipient Hiroshi Miyamura dies at 97