Hurricane Ian swamped a Florida hospital from both above and below, the storm surge flooding its lower level emergency room while fierce winds tore part of its fourth floor roof from its intensive care unit, according to a doctor who works there.
Listen now to WTOP News WTOP.com | Alexa | Google Home | WTOP App | 103.5 FM
(1/8) 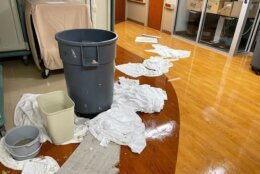 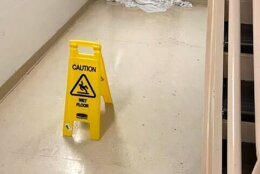 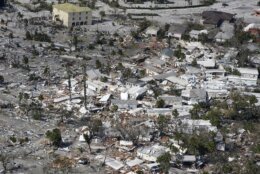 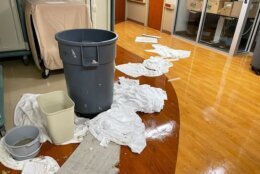 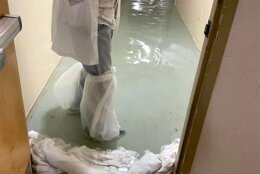 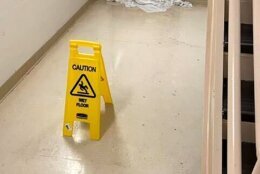 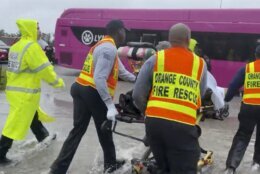 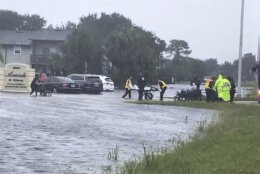 Thousands of people were evacuated from nursing homes and hospitals across Florida on Thursday even as winds and water from Hurricane Ian began receding. Hundreds of those evacuations were taking place across the hard-hit Fort Myers region, where damage cut off potable water to at least nine hospitals.

As many as 20 facilities had reported electricity outages, but Knapp says generators are powering those buildings. Water was shut off at some facilities, too. And one area hospital began assessing the full damage from ferocious winds that tore away parts of its roof and swamped its emergency room.

In Orlando, residents of the Avante nursing home were evacuated to ambulances and waiting buses through floodwater in a neighborhood that doesn’t typically flood. Paramedics rolled out residents one by one on stretchers and wheelchairs. At the neighboring Palm Island at Baldwin apartment complex, cars were submerged in the parking lot.

Even as the problem was too much water in much of the state, at least nine hospitals in southwest Florida had the opposite problem.

“We have one large health system in southwest Florida that is without water in all of their facilities. And so they are fast approaching a point where they will not be able to safely take care of their patients. So that is an urgent focus to get those patients transferred,” said Mary Mayhew, the president of the Florida Hospital Association.

Meanwhile, other hospitals could find themselves further strained, she said.

“There is considerable effort underway to rescue individuals who also will need medical care. And to identify hospital beds available either in the region or elsewhere,” she said.

Hurricane Ian swamped HCA Florida Fawcett Hospital in Port Charlotte – just north of Fort Myers – from both above and below, as the storm surge flooded its lower level emergency room while fierce winds tore part of its fourth floor roof from its intensive care unit, according to a doctor who works there.

Dr. Birgit Bodine spent the night at the hospital, anticipating the storm would make things busy, “but we didn’t anticipate that the roof would blow off on the fourth floor,” she said.

Water gushed down Wednesday from above onto the ICU, forcing staff to evacuate the hospital’s sickest patients — some of them on ventilators — to other floors. Staff members resorted to towels and plastic bins to try to mop up the sodden mess.

The medium-sized hospital spans four floors, but patients were forced into just two because of the damage.

Bodine plans to spend another night at the hospital, when incoming storm injuries could make things worse.

“The ambulances may be coming soon and we don’t know where to put them in the hospital at this point,” she said. “Because we’re doubled and tripled up.”

Despite the inundation, Bodine said patients have been mostly understanding and upbeat.

“For us, as much as everything is terrible and we’re exhausted … as long as our patients do OK and nobody ends up dying or having a bad outcome, that’s what matters,” Bodine said.

Colorado Springs reckons with past after gay club shooting