CHEYENNE, Wyo. (AP) — The U.S. Capitol insurrection dominated Thursday’s debate in Wyoming among U.S. Rep. Liz Cheney and her four Republican primary challengers, with Cheney pressing her Donald Trump-backed opponent on whether she agreed with the former president’s claim that widespread fraud cost him reelection.

That opponent, Harriet Hageman, said there were “serious concerns” about the 2020 election, but stopped short of repeating Trump’s false claim that drove thousands of his supporters to storm the Capitol on Jan. 6, 2021.

Even so, Hageman was dismissive of the U.S. House commission vice-chaired by Cheney that has been investigating the insurrection and events leading up to it.

“They’re focusing on something that happened 18 months ago. They’re not focused on things that are important to the people of Wyoming,” said Hageman, a Cheyenne ranching and natural resources attorney.

While Cheney has taken a key role as one of just two Republicans on the Jan. 6 committee, she’s faced a backlash among Republicans in deep-red Wyoming.

The state Republican Party last year censured Cheney and voted to no longer recognize her as a Republican. Even so, Cheney has if anything increased her national profile, out-raising Hageman by a well over 2-to-1 margin over the first three months of 2022.

During Thursday’s debate, Cheney remained unapologetic for her stand against Trump and his allies as she seeks her party’s nomination for a fourth term as Wyoming’s lone U.S. representative.

“I will not violate my oath of office and if you’re looking for someone who will, you need to vote for someone else on this stage,” she said.

The debate came just two days after Cassidy Hutchinson, an aide in Trump’s White House, testified before the House committee that Trump was told that armed protesters were at a rally he led just before the insurrection, and that Trump tried to go with the crowd he encouraged to march on the Capitol.

“The tragedy is there are politicians in this country, beginning with Donald Trump, who’ve lied to the American people. And people have been betrayed. He consistently has said the election was stolen when it wasn’t,” Cheney said.

Cheney said she would be “interested to know” if Hageman was willing to say the election wasn’t stolen.

While Hageman wouldn’t say the 2020 election was stolen from Trump, she called the use of ballot drop boxes as described in the recent film “2000 Mules” a “great concern.” The film, criticized by experts as seriously flawed, purports to use cellphone location data to show that Democratic operatives were paid to illegally collect and drop off ballots.

Also taking part in the debate were state Sen. Anthony Bouchard, of Cheyenne; retired U.S. Army Col. Denton Knapp, of Gillette; and businesswoman Robyn Belinskey, of Sheridan. None of the five diverged much on other issues in the debate, including blaming President Joe Biden’s administration for high inflation and gas prices.

The debate hosted by Wyoming PBS in Sheridan was closed to the public for security reasons and to prevent people from disrupting the event. 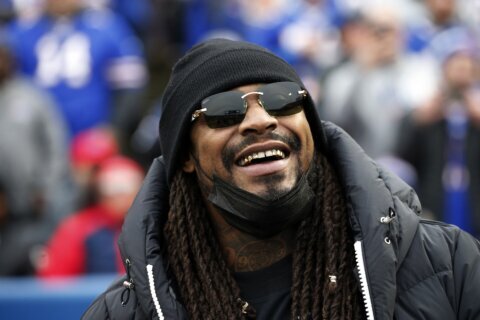