FLAGSTAFF, Ariz. (AP) — The Western U.S. on Monday marked another day of hot, dry and windy weather as crews from California to New Mexico battled wildfires that had forced hundreds of people to leave their homes.

Roughly 2,500 homes have been evacuated because of two wildfires burning on the outskirts of Flagstaff in northern Arizona, officials said at an afternoon briefing.

“We all have felt the pain of watching our beautiful mountain burn. We acknowledged what an incredibly difficult time this is for those who have been evacuated and for those whose homes have been threatened,” Coconino County Board of Supervisors Chairwoman Patrice Horstman said.

The wildfire prompted the county to declare an emergency. It’s been fueled by high winds that have grounded aircraft as an option for firefighting. Crews are planning on being able to use aircraft Tuesday as winds moderate, authorities said.

Incident Cmdr. Aaron Graeser said the Flagstaff-area fire is one of the country’s top priorities for firefighting resources.

“Every potential fire source was a problem today, and every potential unburned area was receptive to fire today,” Graeser said. “That puts us in an interesting situation of trying to, again, assign resources the best we can based on that.”

Current conditions have also kept fire managers from being able to better map it by air but the fire is estimated to be 8 square miles (20 square kilometers).

Crews were expecting wind gusts up to 50 mph (80 kph) as they battled the blaze that has burned through parts of the footprint left by another springtime fire that destroyed over two dozen homes as well as parts of other fire scars.

So far, one home and a secondary structure have been lost in the fire first reported Sunday, Sheriff’s Office Chief Deputy Bret Axlund said.

The Arizona Snowbowl ski resort closed as a precaution because of the wildfire — the second to hit the area this year.

“It’s literally like déjà vu,” said Coconino County sheriff’s spokesman Jon Paxton. “We are in the same exact spot doing the same exact thing as we were a month and a half ago. People are tired.”

Two other smaller wildfires northeast of the blaze were also burning Monday.

Wildfires broke out early this spring in multiple states in the Western U.S., where climate change and an enduring drought are fanning the frequency and intensity of forest and grassland fires.

The number of square miles burned so far this year is more than double the 10-year national average, and states like New Mexico already have set records with devastating blazes that destroyed hundreds of homes while causing environmental damage that is expected to affect water supplies.

Even in Alaska, forecasters have warned that many southwestern fires have grown exceptionally over the last week, which is unusual for that area. Southwest Alaska normally experiences shorter periods of high fire danger because intermittent rain can provide relief, but since mid-May the region has been hot and windy, helping to dry out vegetation.

Favorable weather Monday helped slow the progression of a tundra wildfire just over 3 miles (4.8 kilometers) away from an Alaska Native village. Moderate temperatures and a shift in the wind that had been driving the fire toward St. Mary’s will allow firefighters to directly attack the flames and increase protections for the Yup’ik community.

In California, evacuations were ordered for about 300 remote homes near a wildfire that flared up over the weekend in forest land northeast of Los Angeles near the Pacific Crest Trail in the San Gabriel Mountains.

“The fuel is very dry, so it acts like a ladder, carrying flames from the bottom of the trees to the very top,” Dierkes said. Crews were also contending with unpredictable winds that were expected to strengthen later in the day, she said.

Aside from mandatory evacuations for some, the remainder of the mountain town of Wrightwood, with about 4,500 residents, was under an evacuation warning. Several roads also were closed.

The fire was 18% contained.

Five people were rescued from a dangerous area after a wildfire broke out Monday near Dulzura in San Diego County near the Mexican border and spread to nearly 600 acres (242 hectares), authorities said.

Two of those rescued were taken to a hospital but there was no immediate word on how they were injured or their conditions, fire officials said.

Fire conditions were elevated because of warm and dry weekend weather across Southern California. Monday was expected to be cooler, but another heat wave was expected at midweek, the National Weather Service said.

In Northern California, a 50-mile (80-km) stretch of State Route 70 was closed indefinitely on Monday after mud, boulders and dead trees inundated lanes during flash floods along a wildfire burn scar.

The causes of the latest California fires were under investigation.

U.S. Forest Service law enforcement officers cited a 57-year-old camper for lighting toilet paper on fire and placing it under a rock Saturday near the origin of the Arizona wildfire. The fire was reported a day later. Court documents show the man told authorities he tried to put the fire out with his sleeping bag, but his attorney said in federal court Monday that doesn’t mean his client was responsible for sparking the blaze.

Flagstaff resident Janetta Kathleen rode her horse, Squish, up a hill to get a better look at the wildfire Sunday evening and watched it creep toward homes in the shadow of the mountain. Her home isn’t directly in the fire’s path, but her family, two bulldogs and horses are ready to go at a moment’s notice.

“I need to know what’s going on because I have decisions to make for my family,” she said. “If the winds shift, we’ll be in trouble.”

Hikers, campers and others who were out enjoying the forest also had to leave Sunday. A shelter was set up at a middle school.

Strong winds sent embers across U.S. Route 89, the main route to the turnoff for the Grand Canyon’s east rim entrance, through the Navajo Nation and up into Utah. Many people commute between the reservation and Flagstaff for work. Parts of the highway remained closed Monday.

“We’re not working directly on suppressing the fire to get the whole thing out right now,” said Coconino National Forest spokesman Brady Smith. “That’s not our focus and it’s not possible right now. Right now, it’s going to be focused on protecting life and property.”

Smoke from the fire near Flagstaff caused hazy skies in Colorado on Monday, obscuring views of the Rocky Mountains from Denver and other cities along the state’s Front Range.

The National Weather Service issued red flag warnings for high fire danger in central and southern parts of Colorado as well as parts of Arizona, New Mexico and Utah.

Winds are expected to ease after Monday with some moisture moving in later this week in parts of the Southwest, the weather service said. 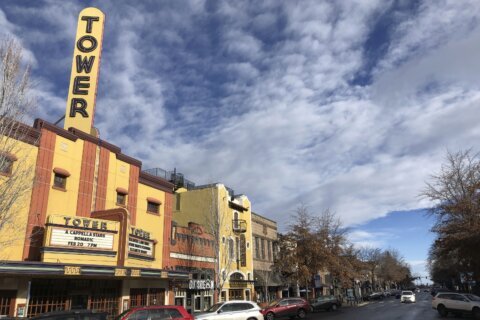 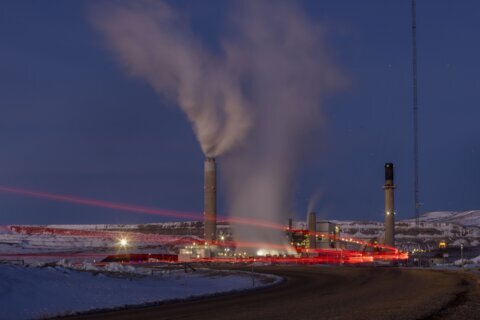 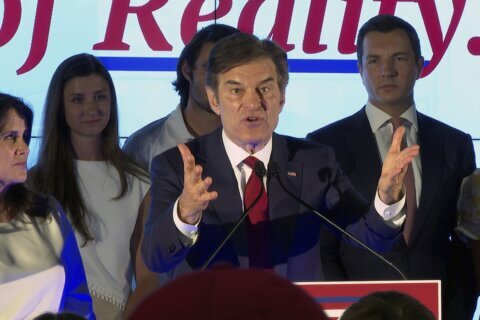