A passenger train derailed in Missouri on Monday afternoon and initial reports are that some people aboard were injured, Amtrak said.
Listen now to WTOP News WTOP.com | Alexa | Google Home | WTOP App | 103.5 FM
(1/18) 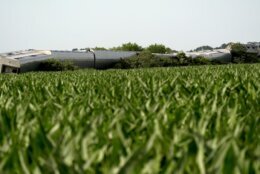 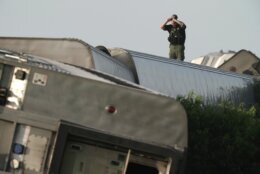 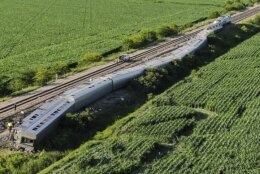 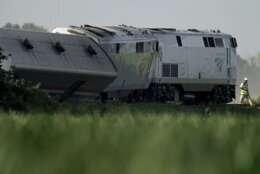 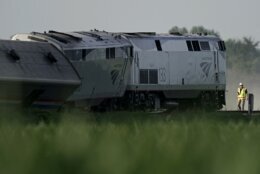 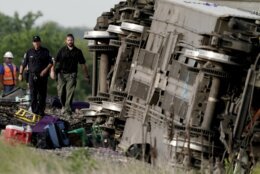 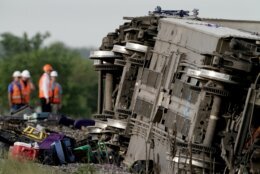 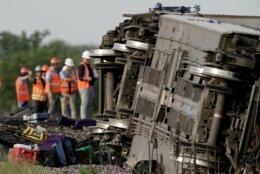 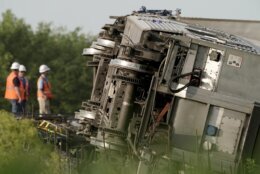 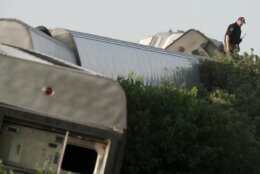 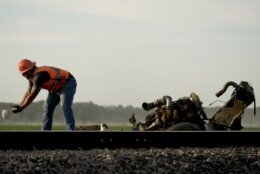 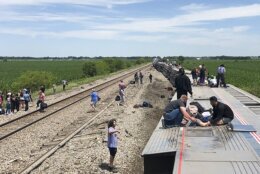 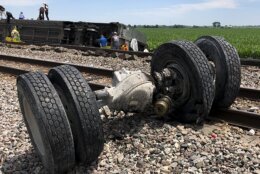 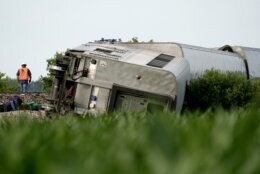 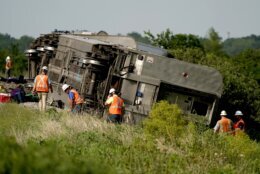 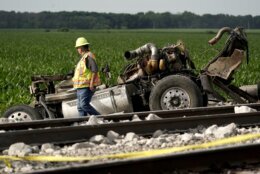 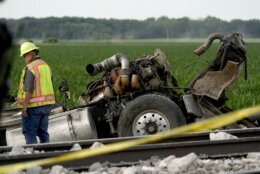 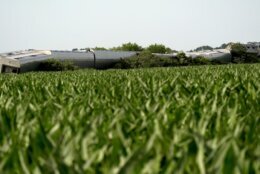 MENDON, Mo. (AP) — An Amtrak passenger train traveling from Los Angeles to Chicago struck a dump truck Monday in a remote area of Missouri, killing three people and injuring dozens more as rail cars tumbled off the tracks and landed on their sides, officials said.

Two of those killed were on the train and one was in the truck, Missouri State Highway Patrol spokesman Cpl. Justin Dunn said. It was not immediately clear exactly how many people were hurt, the patrol said, but hospitals reported receiving more than 40 patients from the crash and were expecting more.

Amtrak’s Southwest Chief was carrying about 207 passengers and crew members when the collision happened near Mendon at a rural intersection on a gravel road with no lights or electronic controls, according to the highway patrol. Officials were still trying to determine the exact number of people aboard. Seven cars derailed, the patrol said.

Rob Nightingale said he was dozing off in his sleeper compartment when the lights flickered and the train rocked back and forth.

“It was like slow motion. Then all of a sudden I felt it tip my way. I saw the ground coming toward my window, and all the debris and dust,” Nightingale told The Associated Press. “Then it sat on its side and it was complete silence. I sat there and didn’t hear anything. Then I heard a little girl next door crying.”

Nightingale was unhurt and he and other passengers were able to climb out of the overturned train car through a window.

The collision broke the dump truck apart, he said.

“It was all over the tracks,” said Nightingale, an art gallery owner from Taos, New Mexico, who said he rides Amtrak regularly to Chicago.

It’s too early to speculate on why the truck was on the tracks, said National Transportation Safety Board Chairwoman Jennifer Homendy. A team of NTSB investigators will arrive Tuesday, she said. Trains won’t be able to run on the track for “a matter of days” while they gather evidence, she added.

At one point, KMBC-TV helicopter video showed rail cars on their side as emergency responders used ladders to climb into one of them. Six medical helicopters parked nearby were waiting to transport patients.

Passenger Dian Couture was in the dining car with her husband celebrating their 40th wedding anniversary when she heard a loud noise and the train wobbled and then crashed onto its side.

“The people on our left-hand side flew across and hit us, and then we were standing on the windows on the right-hand side of the car,” Couture told WDAF-TV. “Two gentlemen in the front came up, stacked a bunch of things and popped out the window and literally pulled us out by our hands.”

Passengers included 16 youths and eight adults from two Boy Scout troops who were traveling home to Appleton, Wisconsin, after a backcountry excursion at the Philmont Scout Ranch in New Mexico. No one in the group was seriously injured, said Scott Armstrong, director of national media relations for the Boy Scouts of America. The Scouts administered first aid to several injured passengers, including the driver of the dump truck, Armstrong said.

High school students from Pleasant Ridge High School in Easton, Kansas, who were headed to a Future Business Leaders of America conference in Chicago, were also aboard, Superintendent Tim Beying told The Kansas City Star.

Cheryl Benjamin was on her way home to East Lansing, Michigan, after an Alasksan cruise and a trip to Disneyland. She said she felt a bump, then heard a squeal, then looked out the window and saw the cars in front of her falling to the right. Then her car fell, the last to derail. It all took about 45 seconds.

Benjamin told The Associated Press that the passengers organized themselves to escape the cars. Some of the Boy Scouts on board helped her climb out of the train and onto the ground. She was spending Monday evening in a local high school gym, where community members had brought in food for the passengers as they waited for buses to take them to hotels.

Republican state Rep. Peggy McGaugh was at the high school. She said locals heard about the crash and started frying chicken, making sandwiches and delivering pallets of water.

“Being the small community this is, nobody wants to be the hero but everyone wants to help,” McGaugh said.

Mike Spencer, who grows corn and soybeans on the land surrounding the intersection where the crash occurred, said everyone in Mendon understands that the intersection is dangerous, especially for those driving heavy, slow farm equipment. The approach to the tracks is on an inclining gravel road and it’s difficult to see trains coming in either direction, he said.

Spencer said he had contacted state transportation officials, Chariton County commissioners and BNSF Railway, which owns the track, about the potential danger. Spencer, who is on the board of a local levy district, said the dump truck driver was hauling rock for a levy on a local creek, a project that had been ongoing for a couple days.

Amtrak is a federally supported company that operates more than 300 passenger trains daily in nearly every contiguous U.S. state and parts of Canada.

It was the second Amtrak collision in as many days. Three people in a car were killed Sunday afternoon when an Amtrak commuter train smashed into it in Northern California, authorities said.

The Southwest Chief takes about two days to travel from Los Angeles to Chicago, picking up passengers at stops in between. Mendon, with a population of about 160, is about 84 miles (135 kilometers) northeast of Kansas City.

This story has been corrected to show that the train was traveling from Los Angeles to Chicago.