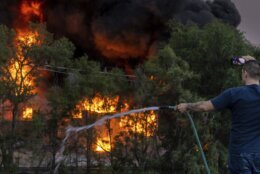 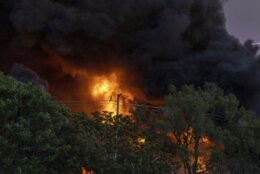 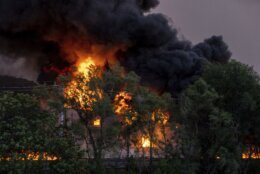 OMAHA, Neb. (AP) — A large fire that raged through a Nebraska chemical plant was extinguished by Tuesday morning and nearby residents who were initially evacuated were allowed to return to their homes, authorities said.

Thick smoke billowed from the Nox-Crete facility just southwest of downtown Omaha that could be seen as far away Monday evening as the Elkhorn River, about 20 miles (32 kilometers) to the west.

Battalion Chief Scott Fitzpatrick said the first call for help came shortly before 7 p.m. Monday, and firefighters who initially entered the building found a much bigger fire than they had anticipated, forcing them to retreat.

Fire crews then fought the fire from outside the building, noting the presence of chemicals and propane bottles inside. Explosions could be seen and heard as propane tanks ruptured.

No injuries were reported from the fire or explosions. Officials said the smoke posed no major toxicity risks to the public.

The cause of the fire wasn’t immediately known.

According to its website, Nox-Crete makes a chemical coating and deactivator that keeps curing concrete from bonding to forms. It also makes liquid floor hardeners, joint fillers, curing and sealing compounds and water repellents.

A woman who answered the phone at Nox-Crete headquarters Tuesday morning said the company did not have a statement.

Those living nearby were initially encouraged to shelter in place, but an alert sent just before 9 p.m. urged some residents to evacuate. The nearby Columbus Community Center was opened as a temporary shelter for evacuees.

Omaha Public Power District said more than 2,500 customers were without electricity in the neighborhoods near the fire Monday night, but power had been restored to all but a handful of customers by Tuesday morning.

Ex-cop Chauvin to get federal sentence for Floyd’s killing