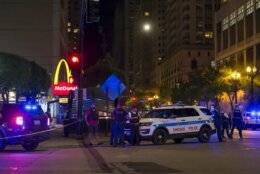 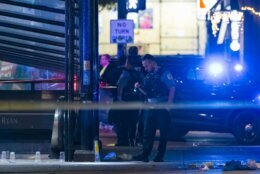 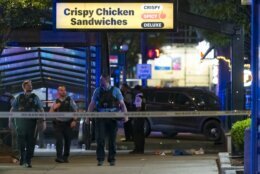 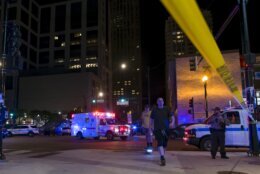 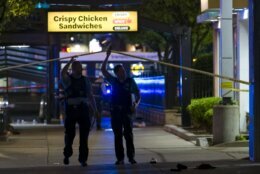 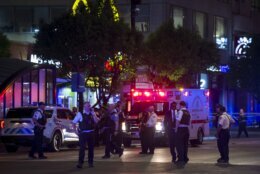 CHICAGO (AP) — Two people were killed and seven were injured when a man involved in a fight opened fire outside a fast food restaurant just blocks from Chicago’s famed Magnificent Mile shopping district, authorities said Friday, as the city vowed to address a recent spate of shootings downtown and a surge in gun violence citywide.

The gunfire at around 10:40 p.m. Thursday near a McDonald’s on the city’s Near North Side sent bystanders scattering, including a female who was critically injured when she fell onto a third rail in a nearby subway station where many bystanders ran for safety.

The name and age of the person will not be released until he has been charged, Brown said. The department later clarified that the suspect is an adult. Investigators were also searching for a person that Brown said may have handed a weapon to the gunman shortly before the shooting.

Brown said the shooting stemmed from a fight but detectives have not determined what the fight was about.

The fight created a chaotic scene even before the gunfire. That part of the city is typically crowded with tourists, students from the downtown campus of Loyola University Chicago, parishioners of the city’s famed Holy Name Cathedral, and people coming to the area to shop and dine in restaurants.

“When the fight first started, we were right next to them,” 18-year-old Deonna Jackson told the Chicago Sun-Times. ”We had to run because I didn’t want anyone to swing on me.”

On Friday afternoon, the Cook County Medical Examiner’s office identified one of the people killed as Antonio Wade, 30. It was not immediately clear where he lived. The name of the second victim had not been released and no information has been released about the people who were wounded.

Chief Juan Hernandez of the city’s fire department said the shooting prompted officials to stop a Red Line subway train between two stations to allow police to search for weapons on the rails, according to the Chicago Tribune. Hernandez said the department evacuated passengers at about 11:30 p.m. Trains were running as normal Friday, the Chicago Transit Authority said.

Brown said he is “confident our officers captured the shooter and recovered the weapon used.”

The shooting comes amid a surge in deadly violence in Chicago in recent years, and follows a fatal shooting last weekend in downtown Millennium Park that killed a teen and led the city to tighten a curfew for young people. And just days earlier, a shooting in an alley near the Chicago Theatre left two innocent bystanders injured, prompting another theater nearby to cancel a performance of “Moulin Rouge.”

After the fatal shooting at Millennium Park, Mayor Lori Lightfoot banned minors from the park unless accompanied by an adult after 6 p.m. Thursday through Sunday — an order that went into effect the night of the latest deadly shooting. And she announced the city’s 11 p.m. weekend curfew for young people would start at 10 p.m., a move a City Council committee approved in a Friday vote, sending it to the full Council for final approval.

“Area residents, commuters, and others simply must have the peace of mind that this highly trafficked area is safe, and it is time for more specific, concrete steps to be taken to address this area once and for all,” Lightfoot said in a statement.

As paramedics and officers responded Thursday, a fight erupted between two people across the street from the shooting, the Chicago Tribune reported, and some people crossed a line of police tape and argued with officers before they were moved away.