MONROE, La. (AP) — Three years ago, when a beaten and bloody Ronald Greene drew his final breath on a rural roadside, his death in Louisiana State Police custody seemed destined for obscurity.

Family members were told — falsely — that he died in a car crash after a high-speed chase. Body camera footage of white troopers stunning, punching and dragging the Black motorist remained so secret it was even withheld from his initial autopsy.

The story state police stubbornly pushed for months about Greene’s death didn’t hold up, unraveled by graphic footage, published last year by The Associated Press, that contradicted police reports and fueled claims of a cover-up.

Now, even as Greene’s May 10, 2019, death has engulfed Louisiana’s premier law enforcement agency in controversy, it remains an open wound for a grieving family still seeking justice. Despite long-running state and federal criminal investigations, no charges have been filed in the case.

“How do you turn your back on a killing?” Greene’s mother, Mona Hardin, said Tuesday before meeting with the local district attorney. “It’s an ugly, lurking evil.”

For months, particularly after AP published the body-camera video last spring, the question had not been whether the Justice Department would file charges but how many troopers would be indicted. The scope of the investigation expanded to include whether state police brass obstructed justice to protect the troopers.

But after months of interviews, grand jury testimony and a recommissioned autopsy, federal prosecutors are increasingly skeptical they can bring a successful civil rights case against any of the troopers caught on camera abusing Greene, according to people familiar with the investigation who spoke on the condition of anonymity to discuss the ongoing case.

A key sticking point has been whether federal authorities can prove troopers acted “willfully” — a key component of the federal civil rights charges authorities are considering. To do that, the sources said, investigators were trying to show that Greene was also pepper-sprayed after he was already in custody.

Even after the FBI enhanced the body-camera video, however, federal authorities have questioned whether the footage proves Greene was pepper-sprayed.

The delays have been compounded by the fact that federal prosecutors had asked the local district attorney, John Belton, to hold off on bringing state charges until the federal investigation runs its course.

But last month, federal prosecutors reversed course and said they would not object to a state prosecution. Belton has said a state grand jury is expected to begin hearing evidence soon.

Separately, a state legislative committee investigating a possible cover-up in the Greene case is squaring up for a showdown over a subpoena to the former head of the Louisiana State Police.

Wednesday, the bipartisan committee is set to hold an initial vote on holding former Col. Kevin Reeves in contempt for refusing to turn over the full three volumes of a diary he kept while leading the agency. Reeves’ lawyer delivered 11 hand-written pages to the committee last week but contends the remainder is not related to Greene and need not be turned over.

Reeves’ journal entries within days of Greene’s death showed an awareness of the potential fallout. “Realize there is a problem — must address immediately,” Reeves wrote in one section that listed a series of possible steps, including suspending troopers or putting them on leave and opening up an internal probe into the case.

But 462 days would pass before state police began an internal investigation into the troopers involved, including one who was recorded boasting he “beat the ever-living f— out of” Greene. Reeves, who described Greene’s death as “awful but lawful,” stepped down in late 2020 amid criticism.

If the committee votes to proceed with a contempt case against Reeves, the matter would then move to another committee and then the full state House, where a vote for contempt would allow lawmakers to launch the legal process to force Reeves to comply with the subpoena.

The committee was formed in response to an AP report that found Reeves informed Gov. John Bel Edwards within hours that troopers arresting Greene had engaged in a “violent, lengthy struggle.” Yet the Democrat stayed mostly silent on the case for two years as state troopers continued to raise the car crash theory.

Lawmakers have said they intend to investigate what Edwards knew about the case and when he knew it, but no one on his staff has yet been called to testify.

Family members gathered Tuesday for a candlelight vigil in a quiet community near Monroe where Greene died, releasing balloons and praying that their long wait for justice will finally come to an end.

Hardin was surrounded by two-dozen supporters wearing T-shirts emblazoned with Greene’s image and phrases including, “I’m your brother” — the words Greene spoke as the troopers began stunning him in his vehicle.

They were joined by former Louisiana State Police Trooper Carl Cavalier, who was fired after speaking out about Greene’s death, and Albert Paxton, the now-retired detective who has said supervisors pressured him not to bring state charges in the case.

“I’m sorry you’ve had to go through this,” Paxton told Hardin, embracing her just feet from the spot where her son died. “You don’t hide from the truth.” 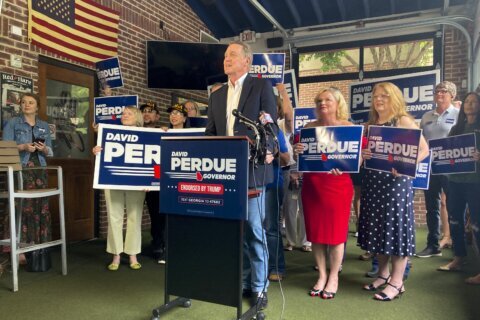