The U.S. government’s nuclear waste repository in New Mexico has major issues in fire training and firefighting vehicles, with its fleet in disrepair after years of neglect, according to an investigation by the U.S. Energy Department’s Office of Inspector General.
Listen now to WTOP News WTOP.com | Alexa | Google Home | WTOP App | 103.5 FM
(1/1) 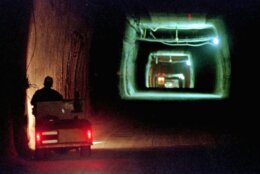 ALBUQUERQUE, N.M. (AP) — The U.S. government’s nuclear waste repository in New Mexico has major issues in fire training and firefighting vehicles, with its fleet in disrepair after years of neglect, according to an investigation by the U.S. Energy Department’s Office of Inspector General.

The investigation was spurred by allegations regarding fire protection concerns at the repository, which is the backbone of a multibillion-dollar effort to clean up Cold War-era waste from past nuclear research and bomb making at national laboratories and defense sites across the U.S.

Investigators noted that the issues with the fire department training program went back to at least 2016. They pointed to an undeveloped training curriculum for the technical rescue program and claims by firefighters that their training needs weren’t being met.

According to the inspector general’s report, the issues persisted because the contractor that manages the repository inadequately addressed and closed recommendations from prior internal assessments that were aimed at fixing the deficiencies. The report also blamed inadequate oversight by Energy Department officials.

“WIPP has experienced growth with the number of buildings and employees since 2006 and is anticipated to operate beyond 2050. The next management and operating contractor must be able to provide effective emergency response at WIPP to protect lives, property and the environment,” the Office of Inspector General stated.

Energy Department officials in a response to the inspector general said the agency has followed through with corrective actions and will continue to “’make progress on ensuring local fire departments and first responders have all necessary training and equipment to handle any event in relation to WIPP’s operations.”

Still, agency officials acknowledged there was more work to do.

The safety concerns come as New Mexico Gov. Michelle Lujan Grisham and others voice opposition to expanding the types of radioactive waste that can be shipped to the repository. In a letter sent this month to U.S. Energy Secretary Jennifer Granholm, the first-term Democratic governor noted ongoing frustration regarding the lack of meaningful public engagement from federal officials on waste cleanup, shipments and long-term plans for the repository.

Just this month, the work of processing incoming waste shipments was temporarily halted after workers discovered radioactive liquid in a container sent from the Idaho National Laboratory.

The latest report from a federal oversight board also cited three recent incidents, including one in which a container from Los Alamos National Laboratory was placed underground without adequate analysis for its flammability. The container ended up posing no risk.

Nuclear Waste Partnership, the contractor that manages the repository, expanded its fire brigade to a department with full-time emergency responders following two emergencies in 2014. One was a fire involving a salt-hauling truck that was followed days later by a radiation release from a drum that had been inappropriately packed at Los Alamos.

According to the inspector general, a 2019 review found that nearly half of the repository’s firefighters had not participated in required live training for at least one year and that some had not participated in over two years. Another review in April 2021 found that not all firefighter training records were maintained in accordance with the hazardous waste permit issued by the state Environment Department.

In interviews, several firefighters told investigators that the majority of training was web-based as opposed to hands-on fire drills, vehicle extrications or rope training. The firefighters expressed concern that without adequate training, they would lose their skills.

As for the fire department’s fleet, federal officials said they were in the process of revising maintenance procedures and that about $1.2 million was spent to purchase two new fire trucks in 2021.