She won the Academy Award for best actress Sunday night for “The Eyes of Tammy Faye” in which she portrays the rise, fall and redemption of televangelist Tammy Faye Bakker.

Chastain emerged as the Oscar favorite late in the season, earning an upset victory at the SAG Awards before adding a Critics’ Choice trophy for a movie that was released six months ago.

Still, she was awed by the moment.

Besides acting, Chastain is one of the film’s producers. She shepherded the project for years after first acquiring the rights to Bakker’s life in 2012, when she saw the documentary the film is based on. Bakker died of cancer at age 65 in 2007.

“It’s very special to be part of a film that means something to me in that it rights a misjustice. It re-examines a life,” she said backstage. “It’s so important to give each other our flowers when we’re still alive, and I feel like we missed that opportunity with Tammy Faye.”

Chastain said she was texting with Bakker’s children during the telecast.

In accepting the trophy from Anthony Hopkins, Chastain noted violence against minorities and that suicide was a leading cause of death for the LGBTQ community, saying she was inspired by Bakker’s compassion.

Chastain joins a long list of actors who won for portraying a famous person, including Meryl Streep as Margaret Thatcher in “The Iron Lady” in 2011.

Chastain is nearly unrecognizable in the film due to the physical transformation she underwent to portray Bakker over the course of 30 years. She wore prosthetics on her face, false teeth for certain scenes and changed hair colors and styles.

The film also won the Oscar for makeup and hairstyling.

Chastain sings several songs in the film. It received mixed reviews from critics, who praised the acting but not the screenplay. The film grossed a paltry $2.7 million during its run in theaters before being made available via streaming.

Chastain was nominated for Oscars twice in the past but didn’t win — in 2012 for supporting actress in “The Help” and in 2013 for best actress in “Zero Dark Thirty.”

Chastain, who turned 45 on Thursday, was raised by a single mother in Sacramento, California. She pursued her love of acting at the city’s junior college and later attended Julliard on a scholarship funded by alumni Robin Williams.

Chastain won over Olivia Colman of “The Lost Daughter,” Penélope Cruz of “Parallel Mothers,” Nicole Kidman of “Being the Ricardos,” and Kristen Stewart of “Spencer.” 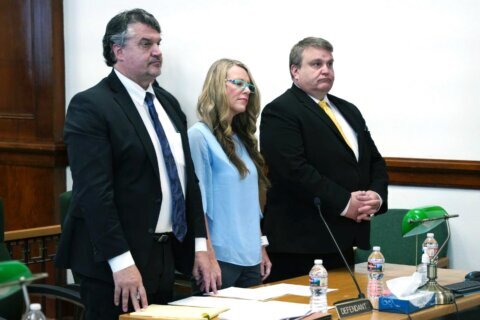