PAHRUMP, Nev. (AP) — The woman dubbed the “Hollywood Madam” when she was accused in the mid-1990s of running a Los Angeles prostitution ring said she is moving out of a southern Nevada town where she has lived for about 15 years.

Heidi Fleiss told the Pahrump Valley Times she is angry that someone shot one of her cherished pet parrots with a pellet gun just before Christmas.

Fleiss told the newspaper she contacted Nye County Animal Control officers and kept the pellet that a veterinarian removed from the bird’s leg as evidence. She said she would pay up to $5,000 for information leading to the arrest of the shooter.

Fleiss said she bought a property in Missouri, where she plans to relocate her exotic bird collection by the end of February.

Fleiss, 56, has lived for about 15 years in Pahrump, a high desert community about 60 miles (96 kilometers) west of Las Vegas.

Her pandering conviction was overturned in California, but she served 20 months of a federal prison sentence for a 1996 tax evasion conviction.

She later moved to southern Nevada with a menagerie of parrots, and was a close friend of Dennis Hof, owner of several legal brothels in Nevada and star of the HBO adult reality series “Cathouse.”

Hof ran for state Legislature in 2018. He fashioned himself as a Donald Trump-style Republican and won the election despite having been found dead a month earlier after celebrating his 72nd birthday. 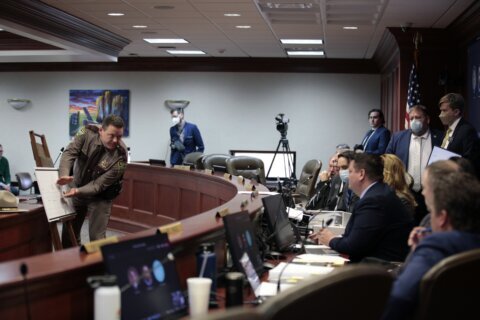