COLUMBUS, Ohio (AP) — Mosiyah Tafari banged on drums and chanted psalms with other Rastafari in a ballroom where the smoke of frankincense mixed with the fragrant smell of marijuana — which his faith deems sacred.

The ceremony in Columbus, Ohio marked the 91st anniversary of the coronation of the late Ethiopian Emperor Haile Selassie I, whom Rastafari worship as their savior. For hours, the group played traditional Nyabinghi music on their most important holy day.

“Cannabis is something that puts you in contact with the spiritual aspect of life in the physical body,” said Tafari, a member of the Columbus-based Rastafari Coalition, which organized the event.

“It’s important for Rastafari because we follow the traditions of the Scriptures and we see that cannabis is good.”

For Rastafari, the ritualistic smoking of marijuana brings them closer to the divine. But for decades, many have been incarcerated because of their use of cannabis. As public opinion and policy continues to shift in the U.S. and across the world toward legalization of the drug for both medical and recreational purposes, Rastafari are clamoring for broader relaxation to curtail persecution and ensure freedom of worship.

“In this system, they’re very focused on, ‘Oh, we can make a lot of money, we can sell these medicinal cards, we can sell this ganja,’ but what of the people who have been persecuted? What of the people who have been sent to jail, imprisoned, even killed,” said Ras Nyah, a music producer from the U.S. Virgin Islands and a Rastafari Coalition member.

“We must address these things before we get too ahead of ourselves,” said Nyah, who attended the ceremony wearing a tracksuit in the Rastafari colors of red, green and gold.

The Rastafari faith is rooted in 1930s Jamaica, growing as a response by Black people to white colonial oppression. The beliefs are a melding of Old Testament teachings and a desire to return to Africa. Rastafari followers believe the use of marijuana is directed in biblical passages and that the “holy herb” induces a meditative state. The faithful smoke it as a sacrament in chalice pipes or cigarettes called “spliffs,” add it to vegetarian stews and place it in fires as a burnt offering.

“Ganja,” as marijuana is known in Jamaica, has a long history in that country, and its arrival predates the Rastafari faith. Indentured servants from India brought the cannabis plant to the island in the 19th century, and it gained popularity as a medicinal herb.

It began to gain wider acceptance in the 1970s when Rastafari and reggae culture was popularized through music icons Bob Marley and Peter Tosh, two of the faith’s most famous exponents. Tosh’s 1976 hit “Legalize It” remains a rallying cry for those pushing to make marijuana legal.

Rastafari adherents in the U.S., many of them Black, say they have endured both racial and religious profiling by law enforcement agencies due to their ritualistic use of cannabis.

Tosh’s youngest son, Jawara McIntosh, a singer and marijuana activist who performed under the stage name Tosh1, was serving a six-month sentence for possession after police said they found over 65 pounds in his rental car, when he was attacked in a New Jersey jail in 2017 and was left in a coma. He died last year.

The attack prompted his sister Niambe McIntosh, Peter Tosh’s youngest daughter, who was a teacher in Boston at the time, to become an advocate for criminal justice reform and launch a campaign to fight the stigma surrounding cannabis and support those affected by its prohibition.

“I realized that his story had to be shared because no family should ever … face these harsh consequences over a plant,” said McIntosh, who also heads The Peter Tosh Foundation, which advocates for legalization.

The so-called war on drugs declared by President Richard Nixon more than five decades ago prompted a rise in anti-possession laws including stricter sentencing.

The negative impacts of the drug war have, for years, drawn calls for reform and abolition from mostly left-leaning elected officials and social justice advocates. Many of them say that in order to begin to unwind or undo the war on drugs, all narcotics must be decriminalized or legalized, with science-based regulation.

”We had founded the Peter Tosh Foundation originally with the ‘Legalize It’ initiative geared at promoting the science, the spiritual benefits of cannabis,” McIntosh said, “but also recognizing that those that have been harmed by prohibition should most be at the forefront of this new booming business.”

The concern is shared by other U.S.-based Rastafari as corporations look to invest in and profit from recreational and medical cannabis.

“Maybe take some of those finances, those many millions and billions and trillions of dollars, and invest them back into brothers and sisters who have been incarcerated over a long period of time,” Tafari said.

“Invest in our communities that have been damaged … maybe allow some of the Rastafari to be a part of those business endeavors as well.”

Shifting public opinion and policy on cannabis has led countries including Canada, Malawi and South Africa to ease laws in recent years.

While it remains illegal on the federal level in the United States, lawmakers from Oregon to New York have passed a raft of legislation legalizing cannabis in a third of U.S. states.

A Gallup Poll released last year indicated that 68% of Americans favor legalizing marijuana — double the approval rate in 2003. In mid-November of this year, Republican lawmaker Nancy Mace of South Carolina introduced legislation in Congress that, if passed, would decriminalize cannabis federally — an impediment cited in many states that have opted not to pursue legalization on their own. But it would not change local-level restrictions, meaning that states would still determine their own marijuana statutes.

In Jamaica, authorities gave the green light to a regulated medical cannabis industry and decriminalized possession of small amounts of weed in 2015. The country also recognized the sacramental rights of Rastafari to their sacred plant.

“We are able to access a certain kind of connection with creation, and that is ultimately the sacramental gift that we seek to defend,” said Jahlani Niaah, a lecturer in Cultural and Rastafari Studies at Jamaica’s University of the West Indies.

Jamaicans are now allowed up to five plants per household for personal use only. But Niaah said this has not stopped run-ins with police.

“Rastafari have had various challenges where they’ve had herbs confiscated and disappeared in police custody and continue to be abused in relation to claiming a sacramental right,” he said.

“There’s really a slip between the pen and the practice.”

Jamaican Minister of Justice Delroy Chuck said in a statement that “instances of perceived discrimination are unfortunate” but the government continues to facilitate equality and inclusion in the legal regime.

Other Jamaican Rastafari are concerned that they have been left out of the burgeoning business.

“The people who went to prison, who had to run up and down from police and police helicopters, they financially could not afford to get involved in the medical ganja industry,” said Ras Iyah V, a Rastafari advocate and former member of Jamaica’s Cannabis Licensing Authority. In 1982, he was convicted, served a short sentence and paid a fine for cannabis possession.

When the Jamaican government launched a program in 2017 aimed at helping “traditional” ganja farmers transition into the legal industry, he was hopeful that it could help the Rastafari community. But today he is “very disappointed in terms of how it is going. The vast majority of our ganja farmers are not able to participate because they don’t have any land.”

Setting up a 1-acre cannabis farm following the guidelines established by Jamaican law can cost thousands of dollars, he said.

“The cannabis industry has now been taken out of the hands of Rastafari and the traditional ganja farmers and placed in the hands of rich people,” he said. “It makes us very bitter because we don’t see any justice in that.”

Who are the 3 officers on trial in George Floyd’s death?

EXPLAINER: The federal charges against 3 cops in Floyd death 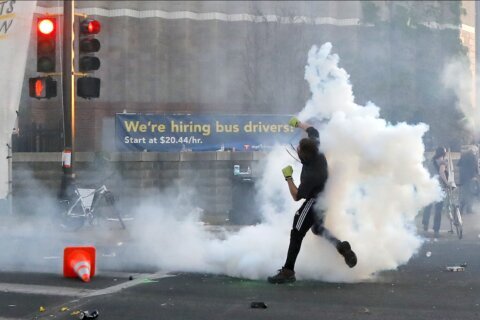 Timeline of events since George Floyd’s arrest and death