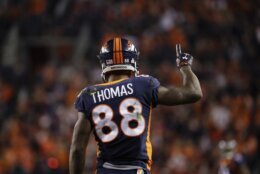 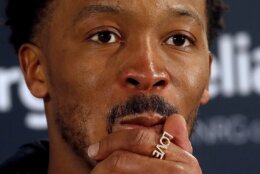 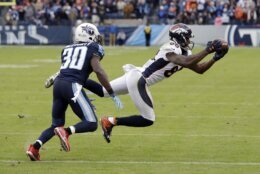 ATLANTA (AP) — Demaryius Thomas overcame a troubled childhood. He managed to shine as a receiver in Georgia Tech’s run-oriented offense. By the time his NFL career was over, he had earned five straight Pro Bowl honors and a Super Bowl ring with the Denver Broncos.

The football world mourned Friday for Thomas, who died in his suburban Atlanta home at the age of 33 — less than six months after officially announcing his retirement from the NFL.

Tim Tebow, who delivered perhaps the most famous pass of Thomas’ career, wrote on Twitter that he “woke up and saw the really devastating news about my teammate and friend.”

“So many are going to remember him for his athletic ability,” Tebow said, “but I’ll be remembering him for his kindness, his smile that would light up a room, and the love he had for those in his life.”

“Preliminary information is that his death stems from a medical issue, and our investigators currently have no reason to believe otherwise,” Lupo said early Friday.

LaTonya Bonseigneur, a first cousin who grew up with Thomas, told The Associated Press the family believes he died from a seizure.

“He had been suffering from seizures for over a year, and we believe he had a seizure when he was showering,” Bonseigneur said in a telephone interview. “He was alone and a friend couldn’t get hold of him, so he called his driver, who has a key because of these seizures, and he went into his home and found him in the shower.”

Thomas last played in the NFL in 2019, appearing in 11 games with 10 starts for the New York Jets. He announced his retirement this past June in a video posted to the Broncos’ Twitter account.

“I’m just happy to say I’m done and it did me well,” Thomas said.

The Broncos said they were “devastated and completely heartbroken” at the death of one of their greatest players, who helped lead them to a pair of Super Bowls and a championship during the 2015 season.

His contributions to the Denver community went beyond the playing field, the team said, noting his work with the Broncos Boys and Girls Club, hospital visits, and his annual football camp.

“We were very much looking forward to celebrating Demaryius for years to come as one of the greatest players in franchise history,” the team said in a statement. “Demaryius’ humility, warmth, kindness and infectious smile will always be remembered by those who knew him and loved him.”

A native of the tiny town of Montrose in southeast Georgia, Thomas thrived even after his mother and grandmother were sent to prison for selling drugs.

Officers burst into the family home when Thomas was 11, allowing his mother to walk her son and his two younger sisters to the school bus before taking her away.

While he put up huge numbers after the Broncos signed quarterback Peyton Manning in 2012, Thomas made his best-known catch the previous season, his second year in the league.

On the first play of overtime in an AFC wild-card playoff game, he broke free over the middle and hauled in an 80-yard touchdown from Tebow to beat the Pittsburgh Steelers.

“Every time I see it, every time I watch it, I still get the chills because it was just crazy,” Thomas said on his retirement video.

Near the end of his career, Thomas got a chance to work briefly with Tom Brady after signing with the New England Patriots. Thomas was cut before they played a regular-season game together.

Brady posted a photo on Twitter of the two together at the Hall of Fame induction ceremony in August.

“I’m so sad to wake up this morning to hear about the passing of my friend Demariyus Thomas,” Brady wrote. “We were all blessed with his humility and positive spirit, and we will all miss him.”

Nicknamed “Bay Bay” as a child after the animated movie “Bébé’s Kids,” Thomas managed to make his mark collegiately as a receiver at Georgia Tech — even after the school hired Paul Johnson to replace Chan Gailey as coach in 2008.

Johnson installed a run-oriented option scheme, greatly reducing the number of pass plays. But Thomas was often left in single coverage and managed to show off the skills that would lead the Broncos to take him with the No. 22 overall pick in the 2010 draft.

“He was such a talent with a great heart for helping others,” Johnson said. “He had the ability to make everyone around him feel special.”

Current Georgia Tech coach Geoff Collins was on Gailey’s staff during Thomas’ first year at the school in 2006. The former player visited Collins’ team in August during its preseason camp.

“I will always remember what a thrill it was for our players when he was able to stop by and spend some time with us,” Collins said. “Bay Bay was truly one of my favorite people. I will miss him terribly.”

Thomas finished his career at Georgia Tech with 120 receptions for 2,339 yards and 14 touchdowns in three seasons.

Teaming up with Manning, Thomas put up much gaudier numbers for the Broncos beginning with a dazzling 2012 season — 94 catches for 1,434 yards and 10 touchdowns — that led to the first of those five straight Pro Bowl selections.

He twice had more than 100 catches in a season, highlighted by career bests of 111 catches and 1,619 yards in 2014 — both of which remain team records. Thomas had five consecutive seasons with more than 1,000 yards receiving.

In Manning’s final year, the Broncos defeated Carolina 24-10 in the Super Bowl to cap the 2015 season. Thomas had only one catch for 8 yards as Denver relied mainly on its defense and running game to secure its first title in 17 years.

The Broncos also made the Super Bowl during the 2013 season, piling up the greatest offensive numbers in NFL history.

But they went down with a whimper in the title game, routed by the Seattle Seahawks 43-8 even though Thomas set a then-Super Bowl record with 13 receptions, totaling 118 yards.

“If we all played like he did, we’d have won,” Denver general manager John Elway moaned.

During the four seasons Manning and Thomas were together, the Broncos went 55-17.

When Denver capped that amazing run with another Super Bowl appearance, Thomas’ mother, Katina Smith, got a chance to watch him in person rather than on a prison television.

Katina Smith was sentenced to 20 years in prison after refusing a lesser term in exchange for testifying against her mother, Minnie Pearl Thomas, who wound up receiving a life sentence.

“I think that drives me more to know that they’re there and they’re watching me,” Thomas said before his first Super Bowl. “I try to go out there and play my best because they’re going to talk about it to the people in the jailhouse.”

Both women were freed by President Barack Obama under an initiative to reduce the number of non-violent drug offenders doing time.

Smith was released in time to watch from the stands as her son won a Super Bowl championship.

After Manning retired, Thomas’ production began to decline as the Broncos struggled to settle on a quarterback.

Then, during the 2018 season, he was traded to the Houston Texans. He managed only 23 catches in seven games with his new team and was released after that brief tenure.

Thomas signed with the Patriots, but was cut before their opener. He finished with the Jets.

Thomas was not married and had no children, according to Bonseigneur. After his mother went to prison, he lived with an aunt and uncle, Shirley and James Brown.

“It made me a stronger man and a better man just being in that atmosphere, working harder, knowing that nothing’s going to be easy,” Thomas once said.

Brown died on Nov. 15 of a heart attack at age 69. Thomas attended his funeral.

“Demaryius was a great guy,” Bonseigneur said. “He came from humble beginnings. He knew God. He was raised in the church and by a close-knit family.

“Even though he rose to stardom, to us he was just a kid from Montrose. We never fathomed he would go on to do all these amazing things. He was just a kid who loved playing football.”

Man allegedly released over COVID-19 diagnosis back in jail