NEWPORT NEWS, Va. (AP) — In a mostly empty conference room at a Virginia cultural arts center, Tara Simmons was looking for someone who might help her stave off eviction.

Simmons, a 44-year-old home health aide who lives with her two children and two grandchildren, was only a month behind on her rent. But that didn’t stop her landlord from ordering her out of the house by Saturday, when the federal eviction moratorium ended.

Already enduring health problems, Simmons said she feared she would be out on the street.

“I’ve been in my house for four years now. And two months before my lease was up, I get an email saying that they weren’t renewing my lease,” said Simmons of Newport News, Virginia. “That’s it. No explanation why or whatever.”

“I’ve been trying to find somewhere to move since I got that. I still haven’t been able to find a way to move because of the economy. … This pandemic is hard.”

As a state lawmaker made a few remarks and others grabbed free lunch, Simmons connected with attorneys from the Legal Aid Society of Eastern Virginia. They advised her that her landlord needed a court order to get her out. She was safe for now.

The Virginia event in late July is part of a growing national movement — bolstered by tens of billions of dollars in federal rental assistance — to find ways to keep millions of at-risk tenants hurt by the coronavirus pandemic in their homes.

The push has the potential to reshape a system long skewed in favor of landlords that has resulted in about 3.7 million evictions a year — about seven every minute — according to the Eviction Lab at Princeton University. Many are Black and Latino families.

“This is an opportunity not to go back to normal, because for so many renters around the country, normal is broken,” Matthew Desmond, author of a Pulitzer Prize-winning book on evictions and the principal investigator at the Eviction Lab, told a White House conference on the issue.

“This is a chance to reinvent how we adjudicate and address the eviction crisis in a way … that works for tenants and property owners better than the status quo, in a way that clearly invests in homes and families and communities, with the recognition that without stable shelter, everything else falls apart.”

Housing advocates have mostly attacked the problem from two directions.

Some teamed up with lawmakers and court administrators to launch programs to resolve eviction cases before they reach the courts. Others focused on state and local tenant protection legislation, including sealing eviction records and ensuring tenants get lawyers. Having an eviction record can make it impossible to find a new apartment, while the right to counsel evens the playing field, since most landlords, but not tenants, come to court with a lawyer.

Many of the ideas have been around for years. But the scope of the eviction crisis during the pandemic, the historic amount of federal rental assistance available and the eviction moratorium changed the calculus. Politicians from areas that rarely see evictions were hearing from anxious constituents and craved a solution. Landlords were more willing to participate in the programs because evicting tenants became a challenge.

“The pandemic, at least here in Baltimore, has created a sense of urgency around creating some forms of tenant protection,” said Carisa Hatfield, a housing attorney for the Homeless Persons Representation Project, noting Baltimore passed a bill last year guaranteeing tenants the right to counsel and the state adopted a similar measure this year. The city also temporarily barred rent increases during the pandemic and banned late fees.

“The politicians saw the same urgency we did,” she said. “It afforded the opportunity to have a conversation with politicians about the very real problems around evictions, the very real implications for families around being evicted.”

In Colorado, state Sen. Julie Gonzales said the widespread eviction threat encouraged legislators to pass several bills this year, including a grace period for late fees and limits on what fees can be imposed. Tenants also can withhold payment for problems like utilities being shut off or mold, and present that as a defense in court. Another bill that passed gives evicted tenants 10 days, rather than 48 hours, to find new housing.

“We realized that it wasn’t just an urban thing, that rural Coloradans, mountain towns were struggling with people unable to pay their rent,” Gonzales said.

According to the Urban Institute, 47 state and local programs nationwide now offer some mix of legal help, a housing counselor and mediation between landlord and tenant.

Some, like Texas, Michigan and Massachusetts, offer statewide programs, while others, including Chicago, Philadelphia, San Francisco and Pinellas County, Florida, launched their own initiatives. Even states not usually associated with evictions, like New Hampshire and Montana, offer programs.

In Philadelphia, the City Council passed a series of bills last year that include requiring landlords to participate in a city eviction diversion program if the tenant was affected by the pandemic. Then in April, the courts mandated that landlords attend the program before filing an eviction.

“This is a fundamentally important change to the way Philadelphia approaches evictions,” said Rachel Garland, managing attorney at the housing unit of Community Legal Services in Philadelphia.

“Rental assistance and diversion prioritizes the economic health of landlords and complete health and well-being of tenants in a way that resolves situations so landlords get paid, issues get resolved and tenants are able to stay in their homes,” she said.

“Even though it was created in response to the pandemic, its importance will long outlive the pandemic and will hopefully become a permanent fixture in Philadelphia.”

A pilot mediation program in two New Hampshire cities this year was driven in part by concerns that courts would be inundated by eviction cases. The program’s success has the court requesting $750,000 from the state to expand mediation efforts statewide.

“If we can get parties together and either get the case resolved or get them to this emergency funding, I’m saying it’s a win-win-win,” said David King, the administrative judge of New Hampshire Circuit Court, which handles landlord-tenant matters.

The right to counsel, too, has spread.

John Pollock, coordinator for the National Coalition for a Civil Right to Counsel in Baltimore, said Washington state, Connecticut and Maryland have passed right-to-counsel laws. Ten cities have approved measures, including Seattle, Cleveland and Louisville. Milwaukee County set aside money to provide low-income tenants with lawyers.

So far, the initiatives are proving successful.

Some 75% of the 1,788 tenants participating in a Philadelphia program have remained housed, according to the city. In New York, 86% of tenants who had lawyers were able to remain in their homes. Cleveland, which saw legal representation increase from 2% to 19% after the law went into effect last year, said all tenants who wanted rental help have gotten it and 93% who wanted to avert evictions were successful.

A program in Michigan last year resulted in 97% of tenants remaining housed, according to a study from the University of Michigan, the state and Legal Services of South Michigan.

Among them is Regina Howard, a 53-year-old disabled veteran from Southfield who faced eviction last year from the $1,600-a-month house she shares with her husband and grandson. She turned to the state’s eviction diversion program, where she was connected with free legal services. From there, Lakeshore Legal Aid helped her get $24,550 in federal funds to pay for 15 months of rent.

“I was feeling hopeless that there was no help out there. Now I feel better,” Howard said. “You could tell they really wanted to help.” 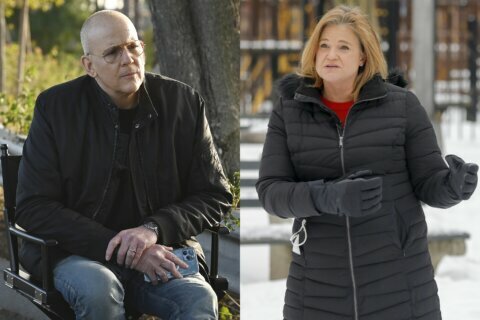 Showtime’s ‘The Circus’ resumes — but has circus left town?