PENSACOLA, Fla. (AP) — One of the men who U.S. Rep. Matt Gaetz accused of being behind a plot to extort $25 million from his family in exchange for having a federal sex investigation into the congressman go away was indicted Tuesday on charges of wire fraud and attempting to stop authorities from viewing his IPhone.

The indictment doesn’t name the victims or other alleged participants.

The indictment said that Alford was part of a scheme to get $25 million from a person identified only as “D.G.” In exchange, Alford promised he could get a presidential pardon from then-President Donald Trump for a family member, as well as fund the release of someone identified only as “R.L.”

Matt Gaetz’s father is Don Gaetz, a former president of the Florida Senate. Others who approached Don Gaetz have said in news reports that they wanted to free Robert Levinson, a former FBI agent who disappeared in Iran more than a decade ago.

Matt Gaetz, who represents parts of western Florida, is under federal investigation over accusations that he had a sexual relationship with a 17-year-old girl and paid her to travel with him, The Associated Press has previously reported. He has denied that he ever had a relationship with any underage girls and says the allegations are false.

The congressman had previously said the allegations were part of an extortion plot.

Alford’s indictment was under seal, so it was impossible to find out from court records if he had an attorney. A Department of Justice news release said Alford made his first appearance in court on Tuesday. 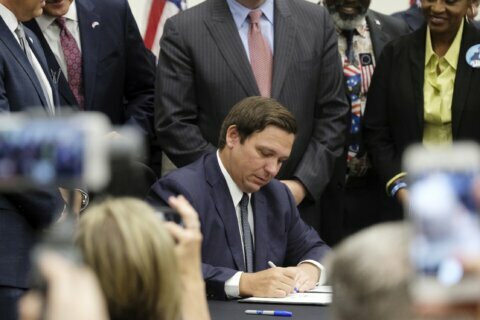