ST. LOUIS (AP) — A former St. Louis police officer has been convicted of a civil rights violation for beating a Black undercover officer during protests in 2017, but the jury could not reach a verdict against a second former officer.

Dustin Boone was convicted Thursday of deprivation of rights under color of law — a felony civil rights charge — for aiding other officers who were beating Detective Luther Hall on Sept. 17, 2017.

Jurors could not reach a verdict against former Officer Christopher Myers, who was charged with destruction of evidence after investigators said he tried to destroy Hall’s cellphone to impede the investigation, The St. Louis Post-Dispatch reported.

Prosecutors did not immediately announce whether they would re-try Myers.

It was the second trial for both men. In March, federal jurors acquitted Myers of the civil rights charge but were unable to agree on a verdict on the remaining charges against him and Boone.

A third officer, Stephen Korte, was acquitted of lying to the FBI and the civil rights charge at the first trial.

Federal prosecutors argued that officers mistakenly believed Hall was a protester during a demonstration following the acquittal of Jason Stockley, a white officer accused of killing a Black suspect. Boone and Myers are white.

Hall told jurors he didn’t identify himself to his fellow officers because he didn’t want bystanders to know he was an undercover officer.

Hall claimed his fellow officers beat him “like Rodney King” and he required multiple surgeries because of his injuries, which he said left him with permanent damage. He settled a lawsuit against the police for $5 million earlier this year.

Assistant U.S. Attorney Carrie Costantin told jurors in her closing statements Tuesday that Hall was not committing a crime when he was attacked and there was no probable cause to beat him.

Boone had a history of sending racist texts that celebrated the use of violence against protesters and arrestees, Costantin said. And Myers was captured in Hall’s cellphone video standing over him shortly before Myers used a baton to try and destroy the device, she said.

Boone’s lawyer, Patrick Kilgore, said in his closing arguments that his client’s texts about violence were taken out of context but offered no excuse for the racist messages. He said Boone was not near the attack on Hall and only helped other officers later because he thought it was a lawful arrest.

Myers’ lawyer, Scott Rosenblum, said Costantin was speculating about what happened before and after a part of the arrest was captured on video. He said a flawed investigation forced the officers to lie about what happened to align with prosecutors’ version of events. 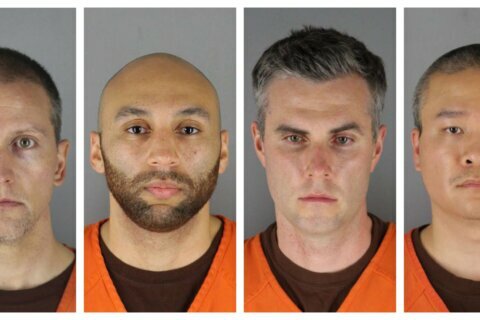