Journalist acquitted in Iowa case seen as attack on press

IOWA CITY, Iowa (AP) — An Iowa jury on Wednesday acquitted a journalist who was pepper-sprayed and arrested by police while covering a protest, in a case that critics have derided as an attack on press freedoms and an abuse of prosecutorial discretion.

After deliberating for less than two hours, the jury found Des Moines Register reporter Andrea Sahouri and her ex-boyfriend Spenser Robnett not guilty on misdemeanor charges of failure to disperse and interference with official acts.

The Des Moines verdict is an embarrassing outcome for the office of Polk County Attorney John Sarcone, which pursued the charges despite widespread condemnation from advocates for a free press and human rights.

Those advocates, ranging from Sahouri’s bosses at the Register to Amnesty International, argued that Sahouri was wrongly arrested while doing her job covering racial injustice protests in Des Moines last May.

More than 100 groups called for the dismissal of charges last summer, but prosecutors aggressively pursued them, arguing that Sahouri and Robnett didn’t comply with police orders to leave the chaotic scene outside of a mall and interfered with the officer who arrested Sahouri.

Sahouri, 25, immediately identified herself as a reporter on assignment but was subjected to what she called “extremely painful” pepper spray blasts and jailed. Robnett, 24, said he was sprayed and handcuffed after telling the officer that Sahouri was a Register journalist.

Sahouri was the first working U.S. journalist to face a criminal trial since 2018, according to the U.S. Press Freedom Tracker. Although more than 125 U.S. journalists were arrested or detained last year, the vast majority were not charged or had their charges dismissed.

Sahouri told reporters she was relieved by the quick acquittal, which she called a victory for press freedom and democracy. She said the case had taken a toll on her personally and professionally, but that she would continue reporting the news.

“I have been dealing with a lot of pressure and anxiety and trauma from the assault and continuing to do my job has been difficult,” she said. “But it is important. That is why I am in this field.”

If convicted on either count, Sahouri and Robnett would have faced hundreds of dollars in fines and up to 30 days in jail.

The Register’s parent company, Gannett, funded their defense, and employees of the newspaper chain rallied behind Sahouri on social media. Columbia Journalism School, where Sahouri earned a master’s degree in 2019 before joining the Register, also expressed solidarity by promoting the hashtag #JournalismIsNotACrime.

Journalists celebrated the verdict, saying it supports their freedom to document newsworthy events. But they said it was disgraceful that authorities pressed forward with the charges for nine months at taxpayer expense.

“Grateful justice was done and @andreamsahouri was fully exonerated,” Gannett news president and USA Today Publisher Maribel Wadsworth tweeted. “But it should never have come to this. She was assaulted, arrested, charged and tried for doing her job. Today’s victory is as much a victory for the 1st Amendment as it is for Andrea.”

Prosecutor Bradley Kinkade told jurors during his closing argument that it didn’t matter Sahouri was a working journalist, saying her profession wasn’t a defense against the charges. In fact, he argued that the video and photos she reported live on Twitter of protesters breaking store windows and throwing rocks was “convincing evidence” that she was near an unlawful assembly.

Kinkade, an assistant Polk County attorney, argued that Sahouri and Robnett were within hearing distance when police gave orders to disperse, but that they stayed with the crowd. He said they didn’t have to actually hear or understand the orders, which were given nearly 90 minutes before their arrests as police tried to unblock an intersection. The orders were barely audible on video played for jurors.

Kinkade urged jurors to accept the testimony of arresting officer Luke Wilson, who claimed that Robnett tried to pull Sahouri out of his custody and that Sahouri briefly resisted arrest. Wilson acknowledged that he had failed to record the arrest on his body camera and did not try to recover the video later, in violation of Des Moines Police Department policy.

Defense attorney Nicholas Klinefeldt said the case was about a reporter who was doing her job and a boyfriend who accompanied her for safety reasons. He said Sahouri was reporting on the “destruction of property so that the community could see what was going on.”

Klinefeldt said the defendants didn’t hear any dispersal orders and that Sahouri was trying to report only from places where she was allowed. He noted that they were running away from a tense location where riot police had deployed tear gas when Wilson arrested them.

Klinefeldt said that the officer’s claim that they interfered wasn’t credible. Sahouri testified that she put her hands up and repeatedly identified herself as a reporter but was nonetheless pepper-sprayed and cuffed with zip ties. Another Register reporter, Katie Akin, was near Sahouri and quickly informed police that they were journalists. Akin was told to leave but was not arrested.

Video captured by a responding officer showed Sahouri in pain, temporarily blinded by the pepper spray and repeatedly telling officers that she was a journalist doing her job. Nonetheless, authorities put her in a police van and took her to jail. 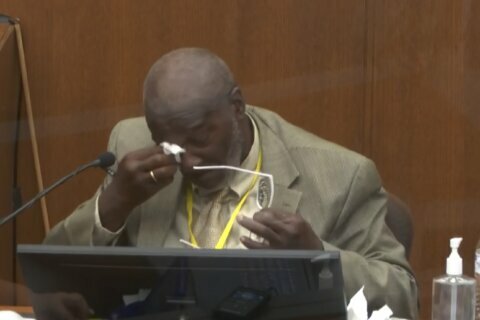