IOWA CITY, Iowa (AP) — An Iowa prosecutor defended his unsuccessful pursuit of charges against a journalist who was arrested while covering a protest, saying Thursday that he believed the evidence was strong and that dismissing the case would have amounted to special treatment.

Polk County Attorney John Sarcone, a Democrat who has held office since 1991, dismissed the outrage he has faced over his decision to prosecute Des Moines Register reporter Andrea Sahouri as unwarranted.

A Des Moines police officer pepper-sprayed and arrested Sahouri last May while she was on assignment reporting at a chaotic Black Lives Matter protest outside a mall. Sahouri, 25, was charged with disobeying police orders to disperse and interfering with the officer who arrested her.

A jury acquitted Sahouri of both misdemeanors Wednesday after a three-day trial. Outside observers said they were stunned by the weakness of the prosecution’s evidence and baffled by Sarcone’s decision to pursue the case for nine months.

“We felt there was more than sufficient facts to establish the case. Based on the facts and the law, we proceeded,” Sarcone told The Associated Press by phone Thursday. “We bring cases to jurors and let them decide. What I have a hard time understanding is how everyone wants to short-circuit the jury process.”

Dozens of press freedom and civil liberties groups asked Sarcone to dismiss the charges last summer, saying Sahouri was doing her job and that journalists must be free to cover protests. They blasted Sarcone after her acquittal for pursuing what they called a disgraceful abuse of prosecutorial discretion that wasted tax dollars.

Sarcone said he could not let outside pressure or criticism influence prosecutorial decisions. Dropping the case because of her status as a reporter and support from outside groups would have amounted to special treatment, he said.

Sarcone denied that he had any “ulterior motive” in pursuing a case against a newspaper that has been critical of him over the years. He said Des Moines police investigators believed Sahouri broke the law by remaining near members of an unlawful assembly who were damaging commercial property and throwing rocks at officers after they were told to leave. His office agreed.

“She got arrested an hour-and-a-half after dispersal orders were given. Those are lawful orders. People can’t defy those lawful orders,” Sarcone said. “No one is above the law.”

But the evidence at trial suggested those orders weren’t clear, and Sahouri and others testified that they never heard them. The orders were issued 90 minutes before Sahouri was arrested as police were trying to clear an intersection where protesters surrounded a squad car. Officers were also heard telling protesters to “back up” and protest peacefully.

Sahouri continued her reporting and was later pepper-sprayed and arrested while getting away from another location where police deployed tear gas to disperse protesters.

Officer Luke Wilson claimed that she briefly resisted arrest by moving her arm away as she was temporarily blinded from the chemicals. He said he failed to record the arrest on his body camera and did not notify his supervisor, which are both violations of department policy.

Sahouri, who is Palestinian-American, repeatedly identified herself as a journalist but was jailed nonetheless. A white Register colleague, Katie Akin, was next to her and was not arrested. A different officer testified that he let Akin go because she seemed compliant and scared.

Sarcone denied allegations that the reporters’ races played a role in their treatment, saying Akin “probably got lucky” to not be arrested.

Sahouri told the AP on Thursday that she was the only journalist arrested that day, and she said it was “extremely ironic” that prosecutors used footage from television reporters at the scene in their case against her. She rejected a plea deal before trial in which she would have pleaded guilty to failure to disperse and the other charge would have been dismissed, saying she was grateful that the Register funded her defense.

“I was doing my job while complying with police orders,” she said. “I literally did nothing wrong.”

Several Democrats vowed to find a candidate to oppose Sarcone in a primary next year if he runs for a 9th four-year term. Sarcone, 70, declined to say whether he would run for re-election, but he broadly defended his tenure as successful.

Sarcone won election by defeating a Democratic incumbent in a 1990 primary in which he criticized his opponent for delegating too much power to a female deputy, Maggi Moss. He hasn’t faced an opponent since.

Moss, who was fired by Sarcone and later became a successful defense lawyer, said Thursday that she was disturbed by video showing Sahouri in pain from pepper spray. She said she was stunned the case was pursued in the face of “common sense, the Constitution and individual rights.”

“It leaves a bad taste. It was needless. It didn’t serve any public purpose. It was sad,” Moss said. “Whatever legacy was there for John, I think this will forever taint it.”

Minnesota cop will be charged in shooting of Black motorist 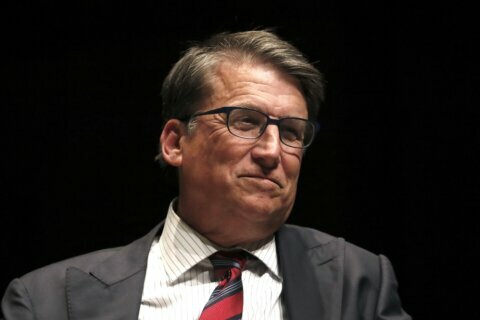